Mucking around in the swamps of Ur

Last night we had another session of the Vaults of Ur, Justin's G+ Hangouts game.  This being a FLAILSNAILS game, we had some new people drop in through the dimensional vortex or however you want to describe it (they wandered in through the caves of Ningauble of the Seven Eyes, or maybe they rode a roller coaster turned Planar Gate and got given character classes by a short bald guy in a red robe, or something like that).

This expedition consisted of:
Thidrek the Sleestak (me)
Kullpetal the Orc (Jez Gordon)
Danyael the Fighter (Oxide/Jeremy of the Busan Gamers)
Flinny the Elder, a Cleric (ClaytonianJP)
Howard the Charming, a Magic-User (Darcy Wyatt)

In our last expedition, we'd recovered a tome that our bargain basement sage said he could use to whip up some plant-killing chemical, as well as potions of antidote.  All he needed were three mysterious plants, belchfire (flaming swamp grass), skaedu (little blue flowers that grow in the shade), and oliver (yellow flaky mushrooms that grow on the sides of buildings).  Kullpetal bought a cart, a lizard creature to pull it, and hired five orc peons to load up any monster trophies on the cart.  Then we set out.

We passed the alchemist's house we explored previously, then turned south to the marshy areas near the walls of Ur.  Everything went fairly uneventfully up to the edge of the marsh.  Thidrek climbed a wall to take a look around, assuming the belchfire would be easy to spot.  It was, there was some growing off to the east.  Also, on an island in the marsh not too far ahead were two strange humans with Duran Duran hair and pale skin, with a giant beetle of some sort.  Not sure if they were hostile or not, we set up an ambush, with everyone but Kullpetal and Howard taking cover, then the two who were exposed yelling a greeting. 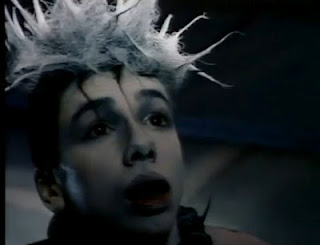 One of the spiky haired dudes pulled out a whistle or ocarina and played a signal, and soon two more similar groups (two men and a beetle each) were converging on us.  They also seemed unsure of our intentions, but also seemed to be warning us away from the water.  They seemed to converse in a clicking language and with the musical signals, which we couldn't comprehend.

Suddenly, the reason for their warning appeared.  A 12' tall robot or golem of some sort rose up out of the swamp water and headed for us.  We let off a couple of arrows/bolts (Jeremy missed, I hit), and Howard dove for cover.  Kullpetal stood his ground.  The thing approached and one hand dropped off, but still linked to the arm by a chain became a massive flail.  It hit Kullpetal, grabbed his leg, and knocked him into the building where Thidrek was hiding.  Thidrek, despite his non-heroic Sleestak nature, ran up and helped Kullpetal get loose, while Danyael attacked the war machine from the rear.  Luckily for us, it had managed to stick its fist through the wall and got it stuck there, so we were able to take shots at it, douse it in oil, and eventually set it on fire.  Kullpetal was beat up a bit, but everyone else was unscathed.

The bug dudes were really impressed, and a large group had now gathered.  One who seemed to be a leader came up and offered us this yellow powder to snort.  Howard, Flinny and Danyeal all tried it, and found they could then understand the bug language of the strange dudes.  They were from the Hive, apparently in some towers we'd seen from the alchemist's shop, and their Queen, they told us, would be happy to have us join them.  After determining that their Queen was a giant insect, and not some hot chick, we politely declined the offer, but did manage to wrangle them into helping us collect the plants, since we had killed the 'demon' that was bothering them.

We managed to find the plant with no real problem.  A pair of harpies flew over, but didn't see us and kept going.  The bug dudes said they were becoming more of a threat.  We may need to deal with them soon.  Also, on the return trip to Fort Low we found a staff with a metal circle set with three spikes through it, a sign of a gang of murderous ne'er-do-wells called the Spiked Circle.  They are allegedly responsible for the death of another adventuring group, and are a big bunch of rogue humans, orcs and beastmen (so sorta like our parties of adventurers, only they outnumber us, I'm sure).

We drug our giant robot carcass back to town, and delivered the ingredients to the sage.  A much more successful expedition (no PC deaths), although except for the offers for the war machine (the sage will trade it for 5 antidote potions and 2 doses of plant killer, someone else offered us a flat 500gp for it), no treasure.

It was a fun game, and I'm looking forward to our next session.

Posted by Dennis Laffey at 3:29 PM