Dean, who has been a good friend and fellow gamer for many years now, has always produced some gorgeous art derived from our games, dating back to Justin's Vaults of Ur campaign (see the labels to this post). Through Ur, Chanbara play tests, various games run by Jeremy, and into West Marches, he's consistently drawn a lot of amazingly detailed pieces that illustrate our games. I've posted some of it here before. He also ran a pretty amazing campaign himself, that started as 4E and migrated to 5E along the way. The campaign was a bizarre mix of Oz, Spencer's Faerie Queene, Narnia, Pellucidar, Dr. Who... and tons of fun.

He's back in Canada now, and producing a webtoon based on his campaign. You can check it out here:

Tales from the Gnomish Tarot

Dean actually gifted me a lot of his original work that he produced while he lived here in Busan. Here's a couple of illos I have on my hard drive (the originals are in my office, I'm at home right now):

I was curious about why my Chanbara sales have suddenly been much stronger than before, and I think it may have something to do with Ynas Midgard's post here (and John Higgins' comment). Thanks guys!

Before I stumbled on Ynas's post (I somehow missed it back in July when he posted it) this evening, I found this Reddit thread from a year or so ago. I'm not on Reddit, but occasionally follow a link to info there. Maybe I should sign up as a Redditor so I could comment when things like this pop up in the future. 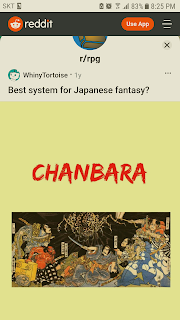 First of all, the OP used my cover right under the question, which sorta implies that this is in fact the answer to that question. Nice! 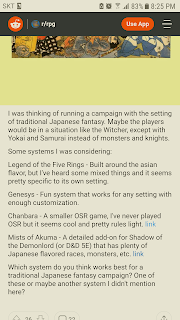 In the actual post, I'm only third of four options, but still, I'll take it as the OP seems positive towards my little game. 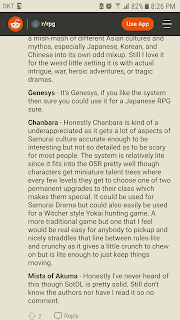 This poster, derkrieger, gives a very nice review of Chanbara. Thanks, derkrieger, if you ever read this. They give L5R a good review as well, but that didn't fit on one screenshot. Also why I had to call them out by handle here. 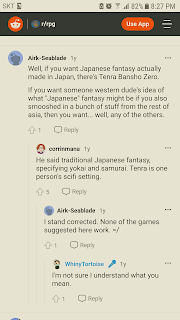 Aaaaaannnnnnddddd...it wouldn't be the internet without someone trying to drop a turd in the punch bowl. Granted, I am just some "Western dude" and my game of Japanese fantasy is filtered through my Western cultural perceptions. That criticism is spot on.

But Airk here has obviously not actually perused Chanbara, because I would love to challenge him to show me what in Chanbara is Chinese, Korean, Vietnamese, Mongolian, Nepalese, etc. Sure, there are some monsters that are pan-East Asian (fox fairies, dragons, and so on), but the version in Chanbara is the Japanese form and name. Also, how it would not be good for the OP's desired "samurai vs yokai" version of something like The Witcher, when one of the three campaign modes I even suggest is "ghostbusting" (page 39).

I don't mean to get my hackles up, especially for something someone posted in the past and will likely never see my response to. But it's hard when the original OA gets panned for claiming to be pan-Asian when it was very highly based on Japanese historical and fantasy tropes, and something like L5R is commonly considered to be Japanese when actually quite a bit of the Rokugan setting (as far as I've looked into it) pulls from other Asian cultures. And then there's my little OSR game which is 100% based on Japanese period and fantasy films/TV, some games & comics influence, my study of Japanese history (casual as it may be), and my experience of living in the country for some time.

September was the best month for Chanbara sales that I've had since 2018 (the year it was released). I guess talking about my East Marches project a lot has been good for that. Which is a good reminder to me that I should promote my stuff more.

If you're one of the people who has purchased Chanbara recently, thank you very much. It is appreciated.

Posted by Dennis Laffey at 8:59 AM 2 comments

The Death of "The Big Model" (GNS)

The Forge, Ron Edwards' rpg game theory website, is no longer the powerhouse it once was. Early in the days of the internet, so much indie game design was influenced by this website. Probably still is, even though it shut down its forums nearly a decade ago. I know I still use lingo derived from The Forge when discussing game theory stuff simply because the one really good thing they did was set down a list of definitions that were clear and concise to discuss various aspects of role playing games.

GNS, and later the Big Model, though, was supposedly Edwards' crowning achievement. A theory of game design that posited the idea that all RPGs are composed of a combination of three modes of play: gamism, narrativism, and simulationism. Or, people make games to game the system, or to create a story, or to run an imaginary world.

But that never sat right with me. Partly, I think, because Edwards believed (still believes? I'm not in contact with him anymore after the destruction of Alderaan...I mean G+) that good game design focused on only one of these three modalities and sought to deliver a game focused only on that modality.

Enter Alexis Smolensk and his elephant. The linked post didn't receive any feedback directly in the form of comments, but Alexis makes the same argument in this post that I have made against GNS. A good RPG doesn't seek to cater exclusively to gamists or narrativists or simulationists. It needs all of them to be a good game. Hell, I didn't need Alexis to figure that out. But what Alexis does in the post is set out what some of the real modalities of play (creative agendas in Edwardsian/Forge lingo) are.

I can add a few more, things like Immersion (related to escapism, but not the same), Wish Fulfillment, Camaraderie, and again I'm sure there are more. These are things players are looking for in a game.

Edwards wanted a tight little 3-part model. He also erroneously linked players' creative agendas with designers' agendas. They are not and should not be the same. Edwards' three agendas may or may not be pertinent creative agendas for game designers, but they really fall short when trying to classify reasons people play RPGs.

A well designed game should be an elephant. Different parts of the game should cater to different agendas, but all should be part of the whole. And as a designer, myopically focusing on only one modality of play really limits the design.

Oh, and Alexis at the end turns his post to his kickstarter menu project, which again I'd urge you to support. I'd like to see it succeed. He only needs about $700 (US) to fund it.