Working on TSR-East (or maybe just TSR? No need to spam everyone with yet another pseudo-European clone of Ye Olde Game with mostly cosmetic changes, is there?) and I'm at the wilderness random encounter chart page.
Yes, I could skip it and return to it later. But I kinda enjoy the tedious and repetitive work of flipping through the monster section over and over, trying to find the best creatures for each terrain type!
Anyway, I started out copying the style of Cook/Marsh-Mentzer, with a general type of creature roll followed by rolling for the exact creature on a subtable. But I noticed something I hadn't before. Several of the terrain types have the exact same assortment of creature types, just in different order. Of course, several of the subtypes (men, humanoids, animals, and partially insects) each have different subtables by terrain type.
I also used this for Chanbara, adding in a few innovations (like seasonal animal encounters, and expanding the "settled" encounters for more variety of type of settlement.
But in the DMR2 Creature Catalog, there are big d% tables for each terrain/climate type, with just one roll per encounter needed to determine what it is. This is also kind of nice, and maybe less cluttered on the page, but harder to find the specific table you're looking for, perhaps.
I also checked the 1E DMG, but big sprawling tables with all monsters, and different percentages by terrain type isn't what I'm wanting here. Mentzer's version has them all on 1.5 pages (more or less), and in Chanbara I fit it all on a single page.
While I don't necessarily need to compact things as much as humanly possible for this game, I don't want to waste space, either. My character facing document is around 32 pages, the monster/treasure doc is around 60 with a few more things to add (sample artifacts, notes, a table of contents or index to find monsters easily). If I could keep the GM book to 32 (currently the wandering monster tables will start on p.13 so very possible) I'd be happy. Yes, the old printer's need to go in packets of 16 pages is no longer a concern with POD, but I kinda like the constraint. I think Chanbara is a better game because I limited what would go in it to what I could fit in 64 pages.
I'm leaning toward the BX/BECMI method of a subtype table for each terrain type, followed by more specific tables. Since I have every monster tagged with descriptors (for weapons +1, +3 vs X or certain spells/magic items), It won't be hard to fill in most subgroup categories.
But there are a few (like Shapeshifter) that don't really have that many entries. I could could leave them off, or lump them together. Mentzer (and I assume Cook/Marsh before him) includes an "Unusual" category. But do all of them belong in certain terrain types? Doing charts like in the Creature Catalog, where all the forest creatures for example are on one table, has its advantages. It also makes it easier to have charts for subtropical, temperate, and subarctic forests, or the deciduous/evergreen split. If I want to make many more charts, that is.
So, instead of deciding on one and working on it this evening, I'm asking you instead. What do you prefer in a wilderness random encounter chart?

Work continues apace on my TSR-East rules, or me once more trying to make a set of OA type rules that I want to play. The TSR-East rules are meant to compliment my Treasures, Serpents, and Ruins house rules for BX/BECMI style play.
Today I realized I hadn't put in any suggestions for alignment in my player facing rules. So I added this:

Lawful characters seek to uphold the ideals of civilization, humanity, culture, and conformity. They treat others as befits their station. Extremists actively try to exert their beliefs on others.

Neutral characters have no strong tendency towards Law or Chaos, and are primarily self-motivated. They may be swayed to one side or the other for brief periods. Extremists try to actively uphold the balance between Law and Chaos.

Chaotic characters value freedom and individuality above all else. They treat others as means to their ends. Extremists actively seek to overthrow society.

Now that the orc alignment/racism thing seems to have blown over, time to move on to a more pressing question about D&D humanoids: Kobolds -- dog-men or mini dragon men?
Starting with Mentzer, I took the dog-like description as more telling than the hairless & scaly description (like I thought that meant they were mangy and diseased) but when later editions made them specifically little crappy dragonmen I didn't oppose it since it was an interesting twist. Anyway, here's the evolution of the kobold for the first 30 years or so. Feel free to chime in in the comments about how you view them.

In Chainmail, they're interchangeable with goblins, and no description given. 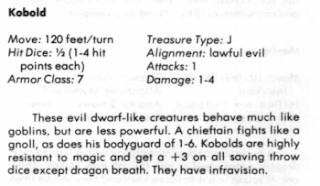 Holmes goes with the folkloric description. Interestingly, they've got a save bonus to everything EXCEPT dragon breath.

In AD&D 1E, we get a lot of description, and for the first time they are described as hairless, scaly, and with small horns. The Sutherland illustrations have very dog-like faces, but the bodies are scaly (or wearing chain mail?) 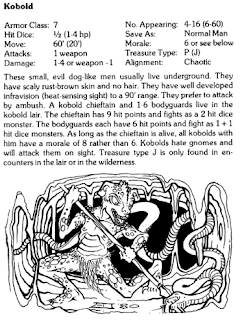 Moldvay is the first time the kobold is described as dog-like. The Errol Otis illustration seems to support my 'diseased' assumption. Mentzer was the first set I owned, but I had seen BX before I got it. So maybe this picture colored my view?

Mentzer's text is nearly identical to Moldvay, but there is no illustration. 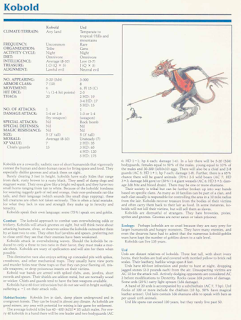 AD&D 2E of course gives us more information on kobolds than most people really need, although a lot of it is identical to the 1E information. The DiTerlizzi picture is definitely a hybrid dog-lizard here, which likely shaped their future development by WotC. 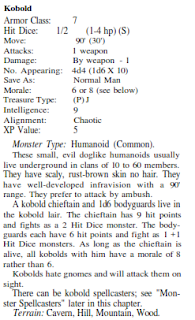 And in the Rules Cyclopedia, of course the text is again nearly identical to Mentzer, only adding in the note about spellcasters (from Mentzer's Masters Set). 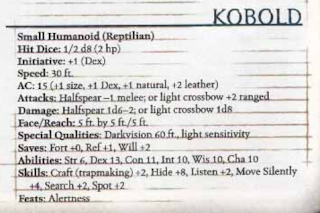 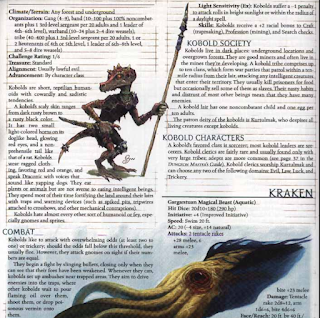 And in 3E and forward, the kobold is finally specifically tagged as "reptilian" and given the draconic heritage. The heads are still described as dog-like, though.

The indie (and very fun) Kobolds Ate My Baby rejected the reptilian/draconic angle, and made them little furry nasties. I really appreciated that. I don't have a copy of that game to post, though.
Are they dog men? Mini dragon men? Something in-between? Or do you go to the folklore sources and make them evil little fae like redcaps? Something original?

Posted by Dennis Laffey at 6:44 AM 9 comments

My son, just shy of 6, wanted to DM a game of D&D like his dad. Yesterday, he got his wish!
I tried to rally the troops, which was entertaining of itself. Jeremy in particular, asking me "What system will it be?" "What about character sheets?" as if it were going to be anything other than freeform gaming. Maybe he had my boys mixed up? My 12 year old is also hoping to DM a game soon, too, and it will likely have some more structure.
Dean and Denis were free, and of course me, too. We created characters! I was a big fat wizard (Stevie basically gave me this character), Dean was a sentient jack-o-lantern, and Denis was a kung fu dragon-man.
The session involved us stopping rampaging ass-goblins by cleaning them, interacting with bizarre NPCs, lots of "home shopping" where Stevie would tell us that there was something for sale and ask who wanted to buy it (usually for outrageously high or low prices), dealing with a monster that needed to go to court, and stopping a dragon by sending it and the court monster onto a space ship.
It was pretty much what you'd expect from a nearly 6 year old's stream of consciousness. Oh, and a lot of it was dictated by the free to use minis on Roll20, as he would find one he liked, stick it on the map, and that thing was suddenly there.
He's looking forward to DMing again, and I'm glad to have him so excited about playing D&D!