You may remember (and a few of you purchased - Thank You!) my fold-up paper minis based on the monsters from the Basic Set D&D. They're still for sale over at my DriveThruRPG page, Hidden Treasure Books.

And now, the first of three sets covering monsters from the Expert Set is up for sale! 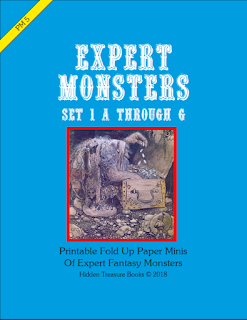 It's got all the monsters from the Mentzer Expert Set from Animal Herd to Griffon.

If you purchased my Basic Monsters sets, you may have been less than satisfied that there was only one image of each monster. I've reformatted this set, so there are multiple monsters of creatures you might encounter in groups, like the giants, herd animals, blink dogs, etc. Creatures that are normally encountered solo, like elementals, devil swine, and golems just get one picture each (but I have different sized elementals for each summoning method).

Set 2 should be coming out in a few months. Need to finish the images for each monster. Layout shouldn't take too long once the images are ready.

Set 3 will cover the 20 or so monsters in the Cook Expert Set that aren't in BECMI, and if I get ambitious also the Isle of Dread monsters. Who doesn't love more dinosaurs?

A little while ago, there was talk (centered on Jeff's Gameblog and started by Zak I believe during G+ discussion, or maybe over at his blog...I stumbled across it from Jeff's blog anyway) about random advancement tables for D&D and similar games. The idea is to break the monotony of all characters of the same class having the same abilities, but avoid the rules onanism of full customization.

I wasn't thinking of that at first, but my line of thinking this morning brought me to it. So I'd better start at the beginning.

A few days ago, my son wanted me to download a game all his friends are playing on their phones (I use Android, my wife iPhone, and my son has my wife's old iPhone). It's a tank battle game. When he described it, it reminded me of my college days playing Scorched Earth.
The basics of this new tank game are the same. Choose your projectile. Set the cannon angle. Set the power level of the shot. Fire at the enemy.

Where it differs in that each tank starts out with six different types of projectile and you cycle through them. Once you've fired one of each your arsenal refreshes. In Scorched Earth, you earned money and could purchase whatever you liked. Also different is that when you win a match, you get a loot crate with random contents: gold, gems, or cards. The cards are for the tank itself or for the various projectiles/weapons. If you earn enough cards of one type, you can spend gold to level up that tank or weapon system.

Last year, my son had me hooked on Clash Royale. Similarly, it uses a 'card' system. Every victory gets you a loot crate with random cards and some cash. You unlock new monsters and spells by finding a card in a crate. You power up monsters and spells by collecting enough cards then spending money for the level up.

So, it got me thinking about RPGs. Would a "card" system work for character advancement in an RPG? I don't mean that the DM should be handing out actual cards (although you could), but there could be a random table to roll on at the end of every session to award points to different abilities or aspects of a character.

Zak, Jeff, & Co.'s system (linked above) is just roll randomly every time you level up. Systems like Gamma World (original and maybe 2nd edition too?) had something like this.

Where a "card" system is different is that the player still has some control over how they level up. So every adventure (or session, or boss monster slain, or any time a treasure hoard is discovered, or at "milestones"...when the fuck ever you want to give them out, DM-sama) the players get a random roll to see what abilities gain points. These of course should include hit points, attack probabilities, saving throws, defenses, and skills. They can also cover spells, fighting maneuvers, thief skills, etc.

Get a new "card" and you get a new ability. Thought you were a Fighter? Congratulations, you're now a Fighter who can cast Invisibility.

Get enough points (or cards) in Invisibility, and you can...if you choose to do so...spend money/time training to improve that ability. You also need to spend those cards. If you had more than the threshold amount, you have a few cards left over, it doesn't reset to 0.

Now, for the system, things could get a little complex. Some things like HP and attack bonuses may scale near indefinitely, while other things should be capped. How many points should each ability need to advance? How much gold/time should it require to level up? Yeah, making this system would be potentially a lot of work. But it might not be that bad. Keeping with the Invisibility example, you might get:

Benefit? Balance between purely random advancement and customization. Don't want a power but you've got the cards for it? Don't spend time/money to level it up.

Drawback? It's a lot of work to bolt something like this onto an existing system. It might be best to build a new game from scratch designed around this. Could be good for a Supers game actually...