I can pretty much sum up this movie in one word, but since this is a blog post, I'd probably better write a bit more than that!

And obligatory note for people Google searching "Thor Ragnarok curse words" and ending up here, there are a few in the movie, but not much.

So that one word? FUN!

The previous two Thor movies were kind of the mostly forgettable duds of the MCU. Kenneth Branagh made a solid movie, but the attempts at gravitas felt forced in some places. I really don't remember much about the second movie except for a cell phone and shoe falling through a dimensional portal and Loki's illusions to trick the dark elf at the end.

This time, Marvel pulled out all the stops and just made a rollercoaster movie. It's not deep. It's not some wonderful study of the human condition. It doesn't have any Oscar level performances. But it's got Dr. Strange being kind of a dick to Thor, Loki scheming as only he can, Thor and the Hulk smashing things, and a lot of humor.

Plus...spoiler alert...just as in the Norse mythology, Asgard is destroyed. How it gets destroyed is actually kind of clever.

And the obligatory after credits scenes...one is apparently a set-up for Avengers: Infinity War, the other is just a fun little extra. My son was a bit disappointed that there wasn't one for Black Panther, but I guess there was already the one at the end of Civil War so Marvel is thinking ahead.

Anyway, if you're in the mood for a fun popcorn action flick with sci-fantasy trappings, this is a good one. I'd rate it up there with the Guardians of the Galaxy movies for fun cinema.

The Lost Art of the Cursed Item

People these days seem to misunderstand cursed items in D&D. Players find some magic items and divvy them up. Then one player finds out that their item is cursed, and they now have some sort of drawback. And they probably bitch and moan a bit, and depending on edition and how high level the PCs are, they probably cast (or purchase) a spell to remove the curse, grumble a bit more about getting screwed over by the DM, and carry on. 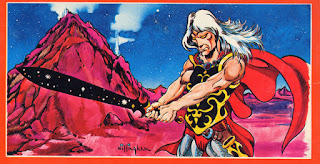 But it's not intended to be that way. Back in the earlier editions of the rules, especially for cursed swords and armor, the rule was that if you could get the curse removed, the item then reverted to a beneficial item*. So curses were a means of providing an adventure hook.

If a player found a cursed weapon or armor, at low levels they had to deal with it until they could find a high level NPC to remove the curse (requiring paying large sums, a quest, or both), or go on a quest  of their own to a location (in a dungeon or far out in the wilderness) where the curse could be removed. Getting a curse was a means of providing the players with a goal - remove the curse. And there was a reward to it besides just elimination of the penalty. The weapon or armor that was previously lowering combat efficiency would improve it instead.

Yes, this post is inspired by my 5E gaming. It seems like newer gamers just don't see the value in things like curses, save or die spells (a double edged sword, yes, but also fun!), or dwindling resources. And WotC seem to also have this mistaken idea that any sort of hindrance is unfun. Everything is awesome! Everyone is special! All the time! Well, to tell the truth, that's NOT fun. Getting cursed and then having to jump through hoops to get rid of the curse is fun and satisfying! Getting cursed (or level drained, or finger of deathed, etc.) adds spice to the game if it actually affects you. If you just need to have the party Cleric come over and cast a spell and it's over, what's the fun in that? Where's the challenge? Where's the satisfaction?

Probably more to come along this line of thought if I have time to blog again soon.