Game Trek: The Next Generation

My research trip/vacation in the US is almost over. It's been a good month with my family. And one of the best parts has been seeing my boys' interest in gaming increase while I've been here.

I've got two boys, Flynn (12 next month) and Stevie (5). Flynn played in my West Marches game while he was in Busan, but for the past year they've been in the US so he only got to play once with us online last year. He has tennis practice or tournaments most Saturday mornings, so our Saturday evening Korea time games are usually busy times for him. Stevie's been asking to join the D&D games ever since Flynn got to participate, when he was only 3.

They've gotten into board games, and one I got for Flynn last Christmas was the updated version of Dungeon! We played a few rounds of it while I've been here. 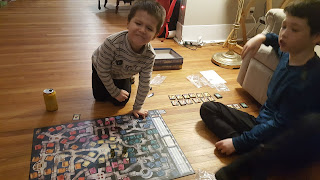 In this game, Stevie and I were both the Rogue (Elf in the original version) and Flynn was the Wizard. Flynn ran out of spells pretty early on, and Stevie went to level 4 and kept getting damaged by a werewolf that he kept fighting to get his treasure back, while I went around levels 1 and 2, got the treasure I needed, and won the game. They had fun and learned a thing or two from the game, I think.

Later, we went to the local hobby shop. I think I mentioned this the other day. The first time we went, Stevie picked up a pair of HeroClix singles based on Thor: Ragnarok. He got Valkyrie and Arena Thor. The next time we went, he convinced us to buy him a set of 6 Captain America themed figures (Cap, Iron Man, Hawkeye, Winter Soldier, and a couple of Cap clones I'm not familiar with from the comics) and a map, so he could play. We've done some actual(ish, no rulebook so going on my memory of what the powers are/do) games, and just played around with the figures, as well. Stevie's only 5, so he's got plenty of time to actually learn the game. And yesterday, we were back at the hobby shop and the dude there just gave him some more figures and maps for free! They were old promo items, he explained.

At the same time we picked up the Captain America set, Flynn got four Official D&D Minis of dragonborn (which he played in West Marches, they didn't have any Half Orc Paladins, which he also played) and he's been painting them himself. He's got two done and another nearly complete. 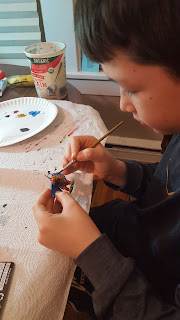 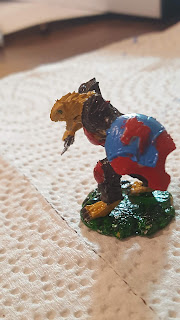 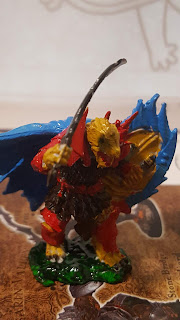 Pretty good for his first time! He's always been artistic. Hopefully he'll get the last two finished tomorrow, since the weather will be good and I can show him how to use the spray-on top coat I bought while the weather is nice.

Finally, one day while rummaging around my old bedroom at my parents' house, they found this 2E era starter pack for D&D. I picked it up many years ago when I was working at WaldenBooks (back when there was a WaldenBooks) mostly for the minis and dice that came with it, because I had the employee discount. The boys brought it home, and we've been talking about playing it but they keep finding other things to do. I'm leaving it with Flynn, though, so maybe he'll go through it and give DMing a try this year. 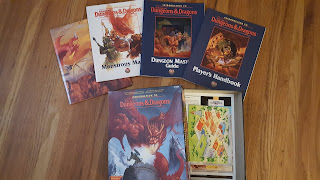 It's a bit disappointing that we haven't actually played D&D together this month. We still have this weekend, but since it's my last one in the States for a while, my parents want to get together one more time, the boys want to go out and do fun things...we'll see what happens. I just feel good about leaving the boys with a gaming itch. I bet they're going to be bugging my wife to take them back to the hobby shop from time to time to get more HeroClix, minis to paint, and so on.

Oh, almost forgot. We watched The Mandalorian together as well. They both loved it! And they want Mandalorian helmets an LEGOs and so on for birthday presents. Flynn wants to craft his own armor for next Halloween. :D

All in all, this has been a great trip for me to share my love of gaming/geekery with my boys!

Posted by Dennis Laffey at 5:49 AM 0 comments

Maybe it's no surprise, seeing how the Dragonlance novels were cowritten, but reading through the Dragonlance Adventures hardback, I can't help but feel how disjointed the setting feels.

I read way too many of the novels back in the day. Even after teenage me noticed the drop in quality, I kept reading, hoping they'd get good again.* As novels, the setting didn't seem so dissonant. It felt internally consistent. But reading the descriptions of things in DLA, I'm really noticing it.

Elements of the setting, like the gods, Knights of Solamnia, Orders of High Sorcery, Order of the Stars clerics, the way half-elves are treated, the histories, etc. all seem to suggest an attempt at a serious setting where you can really get some good drama going from the conflicting elements of the society of Krynn. Especially when you consider that becoming a Knight of Solamnia (at least a Knight of the Crown) gets you nothing mechanically over being a Fighter, but lots of role play options and restrictions. Seems like you'd only sign up for that if you wanted to get into the head of a person trying to live up to the Oath and the Measure.

But then there are the Kender, Tinker Gnomes, Gully Dwarves. Sure, novels need moments of levity to break up the heavier sections of the text. D&D adventures can benefit from them, too. But in the setting, as presented in DLA, these options just seem like they shouldn't fit. Or at least, they shouldn't fit well as player character options. Well, maybe Kender. Despite the nearly universal hatred gamers have for Kender, I still think they could work. And there are examples of more serious Kender, who aren't Tasselhoff clones, that could be worked with, both in DLA and in some of the novels and game books.

Gnomes ONLY being allowed to be Tinkers, and Gully Dwarves in general, really seem like they would ruin the tone in an adventuring party otherwise devoted to rallying allies against the remnants of the dragon armies, or rebuilding the various nations ravaged by the wars, which is the presumed setting for the games using DLA (unless you want it as a reference for running the modules).

*Adult me is curious to read the "good ones" again and see if they really are that good or not. I'm guessing probably not.

Posted by Dennis Laffey at 9:51 AM 5 comments 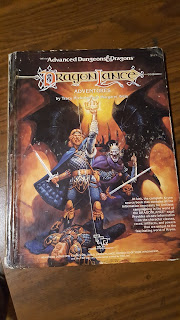 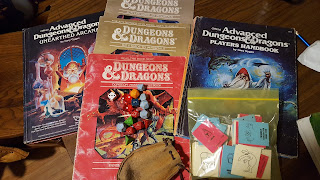