I'm sitting here at my desk at work, taking a break from research, and fiddling around with game stuff. Thinking about what I could do to add some new content to my Hidden Treasure Books store.

I'm still making slow progress on my East Marches megamodule. I have ideas for most of the 120 keyed locations on the map, and the ones I have left to decide on are in the farthest region, which will be for Name Level PCs. I plan to recycle a few small locations from earlier games I'd run of Flying Swordsmen and Chanbara, plus some new ones. The first region (for 1st to 3rd level PCs) has 14 encounter areas keyed on the map. Once I get those areas done and flesh out the home base a bit more, I'll release it as the first installment. That should give me more motivation to keep working on the other four regions (for levels 3-5; 5-7; 7-9; 9+ respectively) and get each installment out sooner rather than later. Once all the installments are done, I'll also be putting it together in a comprehensive package.

So while I'm doing that, I'm also fiddling around with my TSR and TSR-East homebrew rules. Jeff is rolling up another PC, and was asking if he could have a multiclass with one class from the regular TSR and the other from TSR-East. I hadn't really given that much thought. In fact, TSR-E doesn't even have multiclassing rules yet. So that's something else to work on. And if I'm going to better integrate the rules, I should finally figure out how I want to do the "thiefy" skills. Thieves, Assassins and Acrobats get % based skills, while the Ninja and Yakuza have x in 6 or x in 10 skills.

I've also still got the idea in my head that instead of selecting class and race, there should only be classes, and each class has sub-classes/kits/archetypes to choose from, and demi-human versions are subclasses. For example, if you're a Fighter, you can be a normal (human) Fighter, or you could choose to be a Ranger or Dwarf Fighter, for example. Then TSR-E would just be adding new sub-class options like Ronin and Tengu Warrior to the base classes. That's a lot of work for very little real gain, though, so I'll probably just keep it as it is now with lots of classes, and races separate.

I am also working on my DM side rules for TSR-East, and realized that I should give them an edit to make them generic to TSR. Anything traditionally European or Asian can be in separate TSR-East and TSR-West players books and monster/treasure books, if I ever publish this thing. [I was getting some pressure from players to run a kickstarter or something to get this out.

Oh, and I looked through my old Caverns & Cowboys game from a few years back. The play testing on it seemed to work well enough, although we didn't really put the magic system through its paces. I think I might try to find some time to go through it once more (there were a few things players pointed out I could add) and get it up as a cheap PDF/POD game.

So I'm looking at plenty of gaming-related stuff to work on this year. We'll see how much time I end up with to do these things. C&C is probably easiest, I just need to make a few tweaks, then format it and add in art (which I've got some PD images saved, and Jeremy Hart has done some mock-ups of potential pieces I could commission from him). But at the moment it's the project I'm least enthused about.

Ghost Castle Hasegawa, the first adventure I made to play test Chanbara, also is in need of a small edit, then formatting, and art insertion. I should get that done, soon, too. Should, I say, but will I? I've been sitting on it for several years now.

I started work on East Marches again over the weekend. I did a bit of editing to the map (fixing a few errors in numbering, recoloring to make it easier on the eyes on screen but still looking good printed). I also went through and organized the type and terrain of each encounter area on the map. I had used symbols for each type of encounter, and colors for terrain -- but I also have a classic B&W map with the symbols used by BX/BECMI maps too. In my notes, I jotted down each along with the number for the encounter.

Now, I remembered having gone through and brainstormed ideas for what to put in the encounters for the first difficulty band (up to 6 hexes from the home base). They included a name, ideas for monsters, types of treasures, and connections. But I couldn't find it anywhere. I figured it must have been thrown out. So last night, I jotted down some ideas for the first two zones, very basic ones. 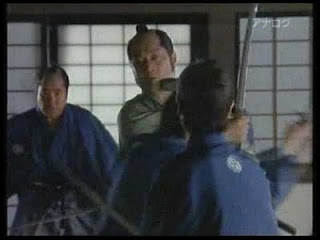 Today at work I found a pocket notebook in my office, and looking inside, there it was. I'd actually made notes for the same areas in the first two zones many months ago.

So, now I've got two sets of ideas for each encounter in these first two zones. One set is more detailed, but looking over them, I will probably save some for later zones. Also, there are some similarities among the two lists, although not always at the same locations.

So, now I get to go through both and evaluate which ones to keep, which to move to further areas out, and which I can drop. I think this is going to be sort of fun.

I'm also going to try and keep the module as system agnostic as possible, so that I can run it with TSR-East, Chanbara, Flying Swordsmen (maybe)
, AD&D OA, Ruins & Ronin, or what have you.

Star Wars! Give me those Star Wars!

In the last three weeks or so, the boys and I have watched Episodes 4, 7, 8, and 9. [Plus Ender's Game -- which while watching, my six year old, upon seeing Col. Graff, commented, "He looks like Han Solo!" and he was right!]

Also, the boys have been heavily into Star Wars themed games on ROBLOX. Yesterday, asking me about various SW games on computer, I mentioned that I used to play Star Wars Galactic Battlegrounds a lot. And I still have the disks. So at their urging we loaded it up and I showed it to them.

Needless to say, they loved it and wanted to play it, too. In fact, they wanted to play it together. So I found it for sale on GOG.com for $2 per copy, and got us each one. And this morning we played together.

I set it up for all three of us to be allied against three Easy mode NPCs. My 6-year-old really enjoyed it at first, just tooling around and experimenting with building stuff and controlling his workers. My 12-year-old was busy building up his forces, but not advancing his Tech level, and when the NPCs got up to Level 3 and attacked, he was at a loss. 6yo got frustrated and rage quit (but came back a little later after he'd calmed down, and I'd sent all my forces to rescue his base).

In the end, we won thanks to my superior hovertank/droideka/bounty hunter with some air support strategy.

12yo spend some time this afternoon with the tutorial mode and was full of questions about strategy and tactics all evening. 6yo watched the tutorial play, and should probably do it too, with some adult supervision and guidance.

We still need to watch Episode 1, and then Rogue 1 and Solo.

I'm nearly through Season 2 of the Clone Wars on my lunch break viewing. In fact, I'll probably wrap it tomorrow (Monday) and go on to Season 3. Will rewatch select portions of it with the boys later. Not because there's anything in it I think they shouldn't see, just because it's the kind of show where you don't have to watch the whole thing.

Anyway, as can be seen, Star Wars fever is strong in this household. [And my boys have a healthy critical eye to J.J.'s work as it compares to that of Favreau/Filoni.]