Slow progress is better than no progress

I've got spell lists for my three Maho-tsukai sub-classes, Onmyoji, Soryo and Yamabushi done (may switch a name here or there for color, but the list of spells is done), and descriptions of the spells for Onmyoji and Soryo are complete. Just the Yamabushi spells left to go.

I also have listed out Background Skills. Each class/profile gets a skill or two automatically, and then a number to select from a list determined by your character's social status. Kuge (nobility) don't have the same sort of background skills as Noumin (peasant farmers) after all.

Skills will work on a modification of the Turn Undead mechanic, or more or less like any sort of action in Presidents of the Apocalypse. Roll two dice (usually 2d6) and try to beat a 7, 9 or 11 (sometimes 5 for very easy things, sometimes 13 or even 15 for very hard things) depending on how hard the GM thinks it will be.

Shinobi special skills work the same way, although they start out with some skills at only 2d4, some at 2d6, and some at 2d8. The dice they roll also improve with level. And their special bonus dice (a replacement mechanic for Flying Swordsmen stunt dice) can be used to improve these rolls.

I've come to really like the "roll 2dX" mechanic, as it gives a nice weighted spread. Extreme successes are uncommon, but extreme failures are also uncommon. It's less swingy than d% or d20. Characters will hopefully seem fairly competent when it comes to skill use in Chanbara.

Still need to decide what to do about "unskilled" checks. A few background skills, like Astronomy/Geomancy, are the sort of thing you just can't do without training. But Fishing? Sure, anyone can fish, just not like a pro. I figure most of the time, the Background skills will not even need rolling. But when they do, and someone tries to do something that should be covered by a skill they don't have, what's the best way to do it?

Lowering the dice is one way. If Background skills are normally rolled on 2d6, then have the unskilled PCs roll on 2d4. That works, but then does that mean Shinobi with a 2d4 in a special Ninpo skill are untrained at it? Or just with minimal training? I can live with that, but some players might object. We'll see. I definitely don't want skills to be exclusive for the most part.

Also, I'm wondering if I should allow Ability Scores to affect Background Skills. The concern is that it would lead to stat inflation a la 3E/Pathfinder. My gut tells me to just stress the Background Skills are just that, the character's background. Now, you're an adventurer, not a poet or blacksmith or inspector. If someone needs something smithed, and your PC has that background, they can do it. Done, move on to the adventuring! It's only if the Hannya Queen demands an intricate cast iron puzzle be crafted or she will devour the village's children that it might be worth making a check to see if you can make one good enough for the snake-hag. [But even then, the players are still more likely to try and kick her butt rather than appease her, aren't they?]

While back at home, my older son (now 7) had a great time raiding my and my brother's old toy boxes for good stuff to bring back to Korea. I'd promised him he could have my old LEGOs, and he decided that just wasn't enough.

So he has some vintage TMNT toys (all 4 turtles, Beebob and Rocksteady, and a frog whose name I'm too lazy to Google), some of my old D&D figures (Strongheart and Kellek, some non-articulated orcs, etc.), lots of old Hot Wheels and Matchbox cars, etc.

Along with them, one set of toys that really fascinated him were the Battle Beasts. Remember these guys?

Originally produced in Japan as a tie-in to Transformers and sold in the U.S. in the late 80's/early 90's, they're anthropomorphized cybernetic animal figures with a variety of odd melee weapons.

Actually, of the two dozen or so he brought back, only 4 were actually mine. Apologies to my brother may be needed in the future when his son next visits grandma and grandpa's and finds them gone.

Anyway, seeing them again made me realize that they're perfect minis to use in a Gamma World type game. Use little green army men (or cowboys, or knights, or pirates) for pure strain humans. Throw in some MUSCLE  Wrestlers (more great 80's toys, and I already have my collection here in Korea) for the altered humans. 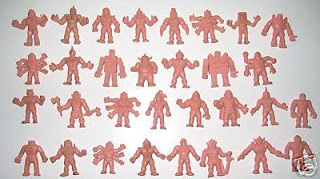 Then just figure out what to do for the mutant plants (a quick bit of garden pruning, maybe?) and you're all set.

Now if I only had time to run GamMarvel World as a face to face game...

Nothing "R" rated (not that there's anything wrong with that), but I'm going through my Chanbara spell list and thinking it's rather bland. Most of the spells have boring names (taken from D&D). A lot of them have game mechanical effects (make you better at X, heal X hit points, gain bonuses to X for Y rounds, etc.), but nothing of a visual aid as to what it might be doing.

So since I'm adding in some new spells anyway, I might as well try and "clean up the neighborhood" with some different names but keep the spell, or just some all new spells altogether.

For an example of making a spell "sexier" (as in: cool, rad, awesome, etc.). I thought of this years ago and am finally getting to use it. You all know the spell Evard's Black Tentacles." It summons cthulhu-ish tentacles to wrap everyone up except the caster. For Chanbara, that same spell will be list as Sumobeya. Instead of otherworldly black tentacles, in my game it summons a stable of sumo wrestlers who can then beat up, grapple with, and hold anyone who gets too close. The mechanics remain the same, the fluff is changed to meet the scenarios.

Sorry persistent blog readers (all ten or so of you), this is simply a reply to a comment on a previous post, but since I've just gotten back from a month-long -- and much needed -- vacation, I'd rather not let the response go unread if Zach K. didn't sign up for email notifications.

Anyway, in response to one of my Chanbara posts last month (which was written in advance of posting), Zach K. wrote:


Zach KJuly 22, 2015 at 9:27 AM
Hey, I'm a huge wuxia fan (less so of chanbara, but I love Kurosawa movies, and I enjoyed 13 Assassins and L5R) and I really like Flying Swordsmen's setting. I'd also like to practice my mapping abilities. Would you mind if I gave Zhongyang Dalu a whirl? Not asking for any money, of course. I'd also like to do a map of the setting of Chanbara, if you'd be okay with that.

Zach, by all means! I'd love to see what you do with the map in Flying Swordsmen (and Chanbara, when I get around to detailing that section of the campaign world a bit more.) I had a lot of fun drawing it, so I hope it's just as much fun for you to recreate in your own style.

When you get it done, I'd love to display it here.  If you want, you can contact me directly at dplaffey [at] gmail.com