Third time's a charm, and I'm on my netbook instead of my phone. Should get through this no problem. (fingers crossed)

So, we've finally gotten to the actual dungeon part of the sample/starter adventure. The first thing Frank notes is that the first level has been stocked according to the Random Dungeon Generation Table (later, on pages 46-47. I've seen a lot of blog posts about that little d6 for contents, d6 for treasure table over the years. Like it or hate it, the sample provided here gives a novice DM a pattern to study and analyze if they're into that sort of thing. I sure wasn't as an 11 year old. My early dungeons had something in every room, and often in the corridors, as well. It took a while for me to learn the importance of the empty room.

Next, we're warned about Room #27, the harpy/yellow mold room, which can only be entered once one of the PCs gets to 2nd level. So probably the Thief or Cleric, if there is one in the party (and they don't die). The room is a killer encounter, potentially, much like the warm-up carrion crawler outside. I think I remember Frank saying in one of his Q&A threads on Dragonsfoot that he loves to start off new players with a TPK just so they're warned that such can and will happen.

Anyway, the most interesting bit of this introduction to the level is the advice that the party should be able to easily return to town, rest up, and come back fully healed and with spells replenished whenever they want. It also says that later, when dungeons are farther from town, the party may want to rest in an empty room, to get back spells, and RECOVER FROM INJURIES. Frank says, and I quote, "A brief stay overnight in an unoccupied room may allow spell casters to relearn their spells, curing any badly wounded characters in the morning."

So the "Extended Rest" that totally heals you in 4E and 5E has its roots right here in Basic D&D. Glad I discovered this. And yes, the interpretation I'm taking from this is not the only possible reading of the line, but it's certainly one that could be drawn from the text.

Now, we get to the keyed entries. And like a normal module, now the map has numbers and the entries match. So we've gone from a barely interactive story (Player's Book) to a more interactive story (players' book again) to a Choose-Your-Own-Adventure style game (this book) to a normal map-and-key module format. Well done, Frank!

I'm not going to go through the entries for each room. There are kobolds, giant rats, giant bats, zombies, and some weird stuff in there. The bedrooms are tricky because there's not enough information about them that can be learned by testing to fully make use of them, and there are no clues to them otherwise. And as I mentioned above, even at level 2 the harpy room can be tough.

For level 2, we're given a map (very simple, similar in fact in some ways to the quick digital map I posted a couple of days ago) and a list of possible creatures that might be found there. And we've been told that on Level 1 there were no wandering monsters, but from Level 2 there should be.

Level 3 we're left to our own devices to map out, and given a few ideas for monsters, including a lair for Bargle, everyone's favorite villain. And there's the suggestion that there could be more levels lower down, including portals to other sections and a dragon's lair.

All in all, this is not a bad little adventure with a nice learning curve. There are some problems with the layout of the keep section (level 1), but this is a game, not an exercise in medieval architecture so I can let them slide (although I try to be more realistic when designing castles myself, with lots of functional space rather than dungeony maze rooms, and yes, even as a kid my castles had some thought about what each area was used for, while dungeons were chaotic messes.)

Twice now I've started the next Mentzer Cover to Cover post, and both times my Android phone (Galaxy S6 if you're wondering) has erased the text when the screen locked as I was checking the pdf on my tablet (Nexus 7).

Screw blogging from the phone I guess. My old S2 never deleted the text like that.

I will try to write the post later, but I will be running the guys through Under the Hillfort Ruins tonight so I might not get to it until tomorrow.

Just did a little test run using GIMP to create a very simple dungeon map. This took me less than 15 minutes to make. With a bit more time, and some more practice with GIMP making maps, I should be able to knock out some more complex structures, and add more details to the dungeon. The map I made yesterday for Under the Hillfort Ruins is more complex. It has doors, statues, stairs, and other features marked on the map, along with room numbers. 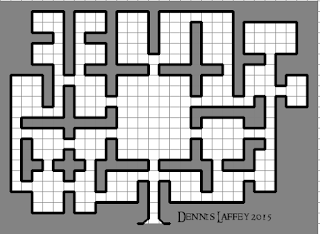 Feel free to download this, stock it, and use it in your own home games if you like. I'll need to come up with a license* for maps if people would like to use them in published adventures, I guess.

*Note, I doubt anyone would want to publish an adventure with this simple little map. Just planning ahead.
.

I started out Hidden Treasure Books in order to sell paper minis. Now, I'm planning on expanding into adventure modules and who knows what else? Well, actually I know what else. When I ever get Chanbara ready for publication, I'll publish in print and pdf through DrivethruRPG via Hidden Treasure Books. Same for Flying Swordsmen: Wu Xing edition, and if Paul agrees, Presidents of the Apocalypse (he's entitled to 50% of any profit on that one, so it may require its own publishing storefront so we can share the profits equally without having to figure what portion of HTB's profits is from PotA every month).

I'm already dusting off an old adventure, Under the Hillfort Ruins. I had the incomplete notes for download for free here on the blog, but since it was from my 3E days, I'm revising it for old school (BX/BECMI/LL) and finishing it up. I also plan to run my group through it next weekend and see if there are any problems in play (there weren't any 10 or however many years ago I first wrote it and used it with my old Yamanashi group).

And there are plenty more old adventures I've got lying around in files and folders on the bookshelf, or digital folders here on the computer.

Another plus, since I've been messing around with GIMP a lot lately to make the paper minis, I'm getting more proficient with it. I redid the map for Under the Hillfort Ruins, since originally I'd used a map someone put online. It was pretty darn simple to make, so expect more dungeon maps in the future as well. I know Dyson Matt Jackson, and some other bloggers make some awesome maps - don't expect that quality, at least at first. But it should be something else fun to do.

Making money (not much, but it's not about getting rich) from doing something I love? It may be just the thing to get me through the dissertation process, which is about to start this fall (fingers crossed that my adviser OKs my idea).

And here it is, PM3 Basic Monsters Set 2! 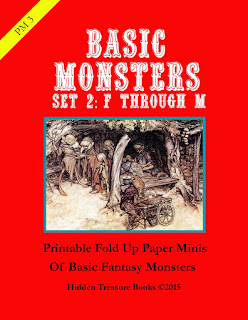 It's a mere $5 for a pdf of monster minis that you can print to your heart's content.

This set contains creatures listed in the red box Basic Set from Ferret, Giant through Mule. That means lots of slimes/oozes, living statues, lycanthropes, and goblinoids, among others.

So, if you need some more monsters to fill up your battle mat, consider this as an inexpensive and portable alternative to plastic or metal figures.

This morning, before heading to work, I printed up a copy of my new paper minis offering, Basic Monsters Set 2. It looks good. So I submitted the book to Drivethru and I'm just waiting on them to approve it.  Of course, I'll update everyone once it's live. 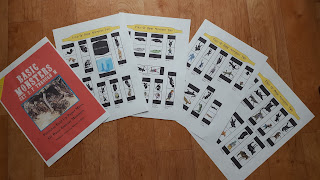 Check out that gelatinous cube, the werewolves (regular and leader), goblinoids, giant lizards and living statues!  All these monsters and more can soon be yours!

Also, a big thanks to the handful of people who've already purchased Basic Adventurers and Basic Monsters Set 1, and the few people who paid a little something for the Free Sample. I appreciate your business, and I hope the minis help make your games more awesome.

And I'm already about halfway done with the base image files for the third Basic Monsters set. Just created the owlbear and orc chieftain today (I'm not working in alphabetical order on these). I still need to collage together a rust monster, but other than that the remaining creatures should be fairly simple (giant snakes and spiders, pixie and sprite, some high level NPCs, and a few other creatures).

The Making of a Paper Mini

I just finished my Medusa for Basic Monsters Set 2. I just have three or four more images to prepare then I can move on to formatting the book. Hopefully, I'll have it out by this time next week, but we'll see.

I thought I'd highlight my process for making minis.

First, I find suitable images from public domain sources. For the normal and giant animals and human types (bandits, etc.) this isn't so hard. Monsters sometimes take a bit of creativity.

While Medusa is a popular figure in Greek mythology, I couldn't find any decent images that would work as is for a game figure. Maybe if I'd looked deeper into Google Image Search or on one of the various PD image depository sites, I could have found something. But what I found was good enough to cobble it together myself.

First, I found this image of Medusa's head: 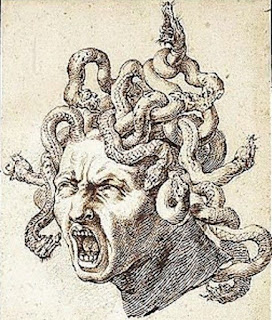 I trimmed away the background using GIMP's lasso tool. Then I colorized the image. 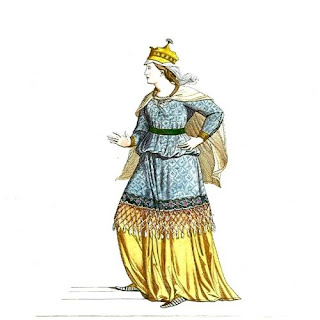 Next, I needed a body.  Looking through my stock, I found this lovely medieval queen. Nice, elegant robes, and the body pose was also dynamic enough. 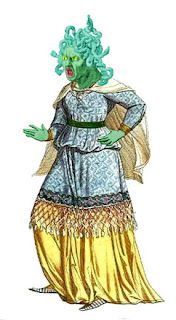 Using layers, I added the medusa head to the queen's body (deleting the original head so it wouldn't show through). Of course, I had to adjust the head size to fit the body. I left it a little bit big intentionally so that her ugly face will stand out.  Next, I recolored the hands to match the tone of the face. 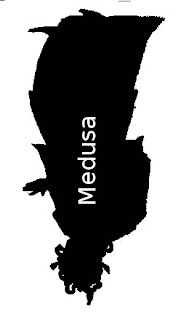 Once the main image was done, I selected the white background using the magic wand tool (including the bits within the snake loops), inverted the selection, and filled it with black.  Flipping the image, I then rotated it 90 degrees, added the label with a text layer, and rotated it back to the inverse position.

Finally, I combine these two onto a blank outline to be fitted into my next paper minis offering.

Voila, a medusa, ready for your gaming table.