Looks like a chimeric hydra-cockatrice. I'll be statting this bad boy up when I have free time! (Image from the OBI Scrapbook blog)

Posted by Dennis Laffey at 9:30 AM 5 comments

Last Friday, Greg Gorgonmilk posted this image from the most recent Knights of the Dinner Table comic -- an article talking about the OSR. 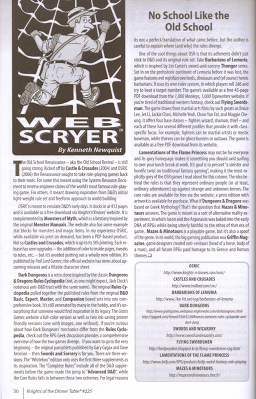 Now, there's only one page, and as some people mentioned, a few big name games (Labyrinth Lord in particular) were left out. But among those that made the cut?

Yeah, baby! Yeah! Yeah! I am the Evil Midnight Gamer, What Games at Midnight!

Thanks to Kenneth Newquist, author of this piece, for including my little contribution to the OSR! Also, thanks to Greg G. and Jens D. (The Disoriented Ranger) for bringing it to my attention.

A necromancer is exploring a dungeon with his trusty skeleton bodyguard, a charmed goblin, and a big bag of loot. He comes to a river of lava cutting across a chamber, preventing further progress to those without magical assistance.

The necromancer casts fly on himself, and then floating disk. But he has a problem. The floating disk is only big enough to carry one of the three -- skeleton, goblin, treasure -- at a time.

So what's the optimal way for the necromancer to get his henchmen and loot across the lava?

Just had a random idea that would make a (potentially friendship ending) interesting game idea. Probably it would be a better idea for a D&D movie.

Chaotic (and or Evil depending on your alignment system of choice) party enters dungeon.

As the party, loaded down with treasure heads to the surface again, characters start trying to bump each other off (some making it look like accidents, others blatantly backstabbing their companions). Sorta like the Joker's bank heist at the beginning of The Dark Knight.

Only one PC makes it out, with most of the treasure. (Bag of holding required to make this work.)

If a movie, the ironic twist at the end would need to be the lone survivor, bruised and bloody, encounters a lone kobold who slays the PC and takes the loot.

Like I say above, it might not play well for a regular group. Maybe as a convention game, it could work.