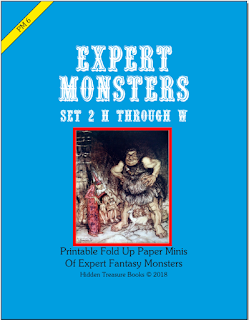 This set is Expert Monsters Set 2, covering all the creatures from the Mentzer Expert Set that weren't covered in Set 1.

For a refresher, Set 1 contains all the creatures from Animal Herd to Griffon. Set 2 contains all the creatures from Hellhound to Wyvern. This is the bigger set, 24 pages plus cover, mostly because the "Men" entry in the book contains so many types of men, with varying armaments. And I've got figures to cover them, including leader types. Also, most leader types get a male/female version to be more inclusive.

$3 per set, so for $6 you can get all your Mentzer Expert monster love going!

As usual, each image on a page is on its own layer, so you can turn off images you don't need to print. And unlike my Basic Monsters sets (which I'm thinking of revising to match the Expert style), there are multiple copies of most of the creatures that would be encountered in groups. This will save paper if you need to print a bunch of one type of creature.

If you're a BX fan (or a fan of a retro-clone of BX), there are a few monsters in the Moldvay Basic and Cook Expert that aren't in BECMI. I've got the list, and will be starting in on those monsters soon. Plus, I'm going to cover the Isle of Dread creatures as well. Because more dinosaurs is always better!

Being a continuation of the journal of the stalwart Green Knight of the Eldeen Reaches, Sir Jack Summerisle, and companions various and sundry, as they explore the hidden world of Pellucidar deep inside the world of Eberron and seek to awaken The Spirit of the Mountain Above so that it may rid itself of the infestation of the Ghoul Kingdom within it.

[Editor’s Note: Several pages of Summerisle’s Journal are mostly illegible. There seem to be references to urination on faces of petrified sleeping giants, battles with demonic apes on spiked cliffs, a hunt for a serpent of some sort, travel by polymorphed ‘something’, finding a lost city, and other hints of adventure. It seems as if portions of the adventure have been lost to posterity, unless another of Summerisle’s companions also kept a record of their quest.]

We huddled in the broom closet of the giant’s animated walking house as it marched its steady path to the Temple we sought were we could awaken the Spirit of the Mountain. As we tried to get some rest to recover our energies, we were discovered by one of the animated wooden caretakers of the mansion. It mistook us for kitchen pests, and sprayed us with some poisoned substance and swatted at us with a broom. We tumbled out of the closet and set to destroying the creature, as a few of our companions succumbed to the poison. Luckily, the caretaker was easy to defeat, and Yuv and I were able to revive our companions.

We relocated to the wine cellar, having found a set of keys on the caretaker. In the wine cellar, several of our companions sampled the ancient giants’ wine. I did not, and I am glad for it turned out to be a mistake. The companions who imbibed fell into a deep slumber and had strange dreams of the house. Later those dreams turned out to be of benefit. And luckily, this time our rest was undisturbed.

Now that we were in better shape, we discussed our options. Rhea the Witch had been turned to stone by a trap, and the prophetic dreams hinted at ways that she could be restored. While I dislike her interest in and meddling with the Far Realm (home of my sect’s greatest enemies of yore), she does have her uses and I still hope to one day convince her of the power of the Greensong which is greater than any twisted horror of the Far Realm. For that reason, I agreed to help with the plan to restore the witch to fleshly form.

It turns out, conversing with the walking mansion itself was the key to solving our mystery. The house told us of a “steam bath” that had magical rejuvenating properties. Using a locate objects spell, we then searched the house and eventually found the bath chamber. In it were two strange tapestries, the figures within them were following our movements with their eyes. I detected fiendish presences within the tapestries.

Just as we were attempting to remove the statue of the witch from the bag of holding (how they got it in the bag in the first place is a mystery to me), the figures in the tapestries came to life and attacked. One tapestry showed a noble’s hunting party, the other three men fishing. The noble on his horse emerged along with a demonic hunting hawk. Iggy, the stone elemental creature, tore that tapestry and prevented another hawk and one minion from emerging. The other two minions had spells and a crossbow, and sent them out of the tapestry at us. And the three fishermen sent out their hooks and lines at us, trying to drag us in.

Luck was on our side, though. The demon spell-caster’s fear spell only affected Iggy. The demons seemed to dislike Flagan the halfling pugilist, but he is quick on his feet and good at dodging blows. I had the foresight to chant a bit of the Greensong which wards one from harm just as the fight started, and Yuv was able to effect a banishment spell upon the leader, returning it to its home in the nether realms. When the next demon, with four arms and an equal number of slashing blades, emerged from the tapestry, it was unable to strike me due to the warding power of the Greensong. With help from my allies, we slew it. Also, Feldspar the Bard, a gnome if I haven’t mentioned him before, managed to remove the fear from Iggy, who returned to the battle. However, the fishermen managed to snare Flagan and were drawing him near the tapestry. The spellcaster demon also was tormenting us with fire and ice magic. A combination of spells, weapons, and my ability to Turn the Unfaithful, sent the demons running back to hell. We burnt the tapestries.

With no more challenges, we inserted the petrified remains of Rhea into the steam bath contraption and Feldspar was able to operate it with help from our more mystically inclined companions. And Rhea emerged looking not only alive but freshly cleaned.

Been a long time since I did an actual play report like this. I've been playing Summerisle, and a few times my alternate PC the githzerai eldritch knight Ryuden Kenjumon, and missing quite a few sessions also for real world reasons.

If I can dredge up the memories of the unrecounted sessions, I will fill in the missing pages of Summerisle's journal (and maybe a strange Ryuden journal or two!). Hey, they're good for XP in the game...

Playing a lot of 5E these days, and it's obvious that to the design folks at WotC, they think die rolling is the most important part of a D&D session. Hence the focus on rolling a d20 as a "core mechanic." And yes, I am continuing to use the scare quotes for a reason. It's because WotC completely failed to understand the true core mechanic of not only D&D but of any RPG.

A few weeks ago, discussing things with some 5E people (players, not the design team), I got the distinct impression that many of them were younger and less experienced in RPGs in general than I am. Not that I'm that old. I'll be turning 45 in a few months, and I'm from the third wave of D&D players who started with the Mentzer box sets. I offered the idea that dice are there to be rolled when everything else breaks down, and gave a link to Erick Wujcik's post on The Forge about diceless roleplay. It was one of the key pieces of writing about RPGs that helped me transition out of 3.5/d20 into the OSR (much more so than any of the GNS garbage). I hope I opened a few eyes, but their reaction was hard to gauge. The topic shifted away quickly. Maybe the revelation made them lose some Sanity points! (I keed! I keed!)

Recently, reading Jon Peterson's Playing at the World - more accurately, back to reading it, I'd gotten halfway in and then found myself too busy to continue until this week - he has a section where he talks about the real core mechanic of role playing games.

And that core mechanic is dialogue.

It's one of those things I've intuitively understood from the beginning. And it's where the real fun of role playing is. Sure, there can be die rolls that are high stakes and provide a cathartic reaction when they succeed or fail. Even lower stakes die rolls can have players excited. But the real meat and potatoes is the rhythm of "description, response/question, answer/action, reaction" that comes from dialogue at the table. All of the die rolling is meaningless without it.

So let your game design freak flag fly. Add in subsystems and minigames and weird % Thief skills and weapon vs armor tables (OK, maybe that's a step too far) that don't all rely on a standard mode of resolution. Design games that don't rely only on probabilities with increments of 5%, or a pool of d6's, or whatever.

The dice mechanics are there for when the core mechanic breaks down or isn't enough, as support systems.

The Dungeon Board Game as Dungeon

I'm sure this has been done by others over the years, but I decided today that I'm going to use the board game Dungeon (by TSR) map as a dungeon and stick it somewhere in my West Marches campaign. 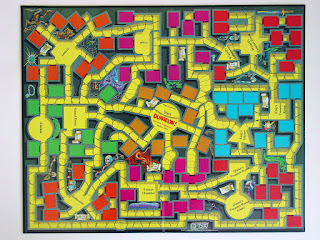 It might be a good choice for my "8-Bit Realm" where I'll have everyone make versions of their PCs using Retro Phaze (the OSR/classic CRPG mashup game). Should be fun!

I think I've got a file somewhere listing the creature and treasure cards from Dungeon. I unfortunately don't have a copy of the game. But with the list I can make the Retro Phaze (or just normal 5E D&D if I don't use this for the 8-Bit Realm) encounter tables and random loot tables.

Posted by Dennis Laffey at 9:24 AM 6 comments