I was thinking about pit traps in dungeons a while back. Apparently (haven't looked at my pdfs, just read some stuff on Dragonsfoot about the subject), OD&D doesn't go into specifics of the damage done by pit traps--there's some rules for falling damage in there somewhere, but not in the pit trap section. That's where the standard 1d6 per 10' fallen rule comes from.

Well, for pit traps in a megadungeon, or at least one with multiple levels designed to get harder as one progresses, I've had a simple idea.

I like this, as it means I can simply make a note on the map of where a pit trap is, and don't have to write down how deep it is. The only extra notes I'd need is if there were spikes, it fills with water or some other substance, a monster was at the bottom, or something like that.

Last night, as I was coming home from work, I stopped in a little 'dollar' shop called Daiso. I wasn't really looking for anything in particular, but in the toy section I saw they had big red foam d6s for sale for 1000won each. So I picked up a trio of them for my son.

When I got home, he was having fun throwing them around and imitating me when I said the numbers that came up (he can count to twenty with a bit of help, to ten on his own except for sometimes skipping 8--he's 2 1/2 years old). Anyway, I made sure to tally up the dice for the first 18 rolls he made. If he'd been rolling a Classic D&D character, here's what he would have gotten:

Not too shabby! You could do anything but a Cleric easily with those numbers. And they're good numbers for a Fighter, Thief or Halfling.

Posted by Dennis Laffey at 7:40 AM 1 comments

Once upon a time, way back in the crazy days when I was into 3rd Edition D&D and frequented the Wizards.com message boards, they had a section for essays, research, and more formal stuff that required authorization for all posts by the moderators. It was called Redgar's Repository. I have no idea if it survived the 3E to 4E purge, er transition, or whatever it was, as I'd long since stopped visiting that little chunk of the internet.

But my little contribution to Regdar's Repository was an article listing the sources of the monsters in the 3E Monster Manual. As best I could, I searched my books of mythology and folklore, online sources, and asked for a lot of help from other people in the know.

Of course, there was (as one might expect) debate on the origins of some of the monsters. Since monsters have changed over time, some names get recycled from time to time, and two differnt D&D monsters are sometimes the same monster in mythology, it can be hard to get a definitive answer for some creatures. Add to the fact that some monsters were created whole cloth, and others are basically created by some TSR writer but given the name of an actual monster, and there's bound to be confusion.

One of the funniest complaints I had in the thread about my article was about the Cloud Giant. It's obvious that Gygax or Arneson modeled it after the giant in Jack and the Beanstalk. Lives in clouds, smells really well. One poster just refused to admit it, and tried arguing left right and center about some other origin, how the mighty and regal Cloud Giant could never be based on a kiddie fairy tale! Of course, I challenged him to show me another source of the monster, and he couldn't.

Well, I was reminded of that because we're reading Jack and the Beanstalk in one of my kindergarten classes. Another class is reading Hansel and Gretel, another Puss-in-Boots. And it brought home to me how much monster slaying/treasure looting there is in old fairy tales, in addition to reminding me of that old thread on Regdar's Repository.

Anyway, if you've got kids too young yet to dive into Robert E. Howard or Fritz Leiber but want to get them interested in D&D, a good Fairy Tale inspired campaign might work wonders. And you may be surprised at how well kids brought into the game that way take to the idea of outsmarting the monsters rather than just charging in with swords drawn!

Looking at my Google Analytics numbers for this blog last night, I was a bit surprised to see that there's someone in Monmouth, IL that really follows this blog closely. Since I'm originally from not too far away from Monmouth--a little tiny town called West Point, about half way between Quincy and Macomb--I'm kinda curious if it's someone I actually know or not.

I've also been getting a lot more hits from Seoul lately. This month I've gotten more hits from Seoul than from Busan. I haven't been up to Seoul for a while, but if any of you Seoul folks ever make it down to Busan and want to meet up for a pickup game or something, just let me know!

Posted by Dennis Laffey at 6:23 AM 3 comments

I decided to take a look at my revised megadungeon maps today. Unlike Greyhawk Castle or some others, I made my revised version have the castle ruins above still there, as an extension of the 1st level, although there will likely be some 2nd and 3rd level type encounters there as well.

I'd never gotten around to drawing up the upper levels of the ruined keep, but I did that today. Then I numbered the encounter areas for it and the first two dungeon levels (all I've drawn so far).

That's 467 areas to be explored suitable to Basic Set level characters, plus whatever else ends up on Level 3, not counting two sublevels I'm porting over from my earlier maps.

Holy crap, I don't have the time for that! Well, if I key them a little at a time, I will.

Came home from work last night and Terminator 4 was on TV, so I watched it and it reminded me of an idea I'd had a couple years ago, formed when I'd heard they were making the next Terminator movie to take place during the War Against the Machines.

I had the idea that Star Frontiers would actually make a fairly good, simple system to run a War Against the Machines campaign. Strip out the Yazirians, Vrusk and Dralasites. Start the PCs with limited technology, but Skynet has access to everything in the book. Robots are pretty tough opponents in that system (and easily customizable), and the skill system is designed primarily around combat and secondarily around exploration. You really don't need much else for a post-apocalyptic non-scifantasy setting.

My grand idea was to allow the players to play a bit of a metagame, managing the resources of their survivor community--population, supplies, tech, and then have the PCs missions affect those community stats. Rescue some prisoners of Skynet and your population increases, allowing you more "credits" (which would be abstract rather than hard currency as in the normal rules) to purchase gear for missions. Raid the right Skynet factory, and you suddenly open up gyrojet or sonic weapons as available to the PCs. Stuff like that.

I think it could be a fun game, but finding players for it, and my own ability to keep interested in it might be tough.

Posted by Dennis Laffey at 7:13 AM 2 comments 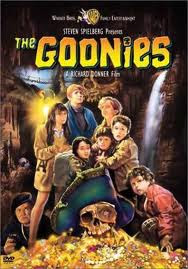 The Goonies was the first movie I ever saw more than once in the theater. I actually saw it three times in the theaters in the summer of '85. And we were heavy into playing D&D at the time, as I'd gotten my Mentzer Basic Set as a birthday present in December of '84.

Somehow, though, it took me until at least '87 or '88, when I had the Companion Set, to finally draw up One Eyed Willy's caves as a dungeon. Don't know what took me so long. Anyway, here are a couple scans of the dungeon. I don't know where the Fratelli family's stats are. I made Ma a Magic-User and the brothers Thieves, but other than that I don't remember.

The adventure notes are keyed on the maps, but they're in pencil and 20+ years old, so sorry if they're a bit hard to read. Fans of the movie should enjoy them, though! 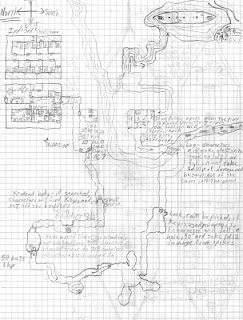 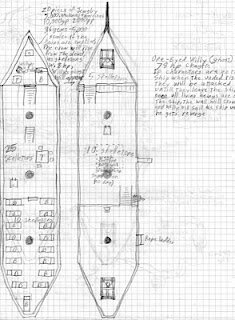 Jeff Rients has another awesome post about his recent gaming here. The title of his post immediately made me think of this... 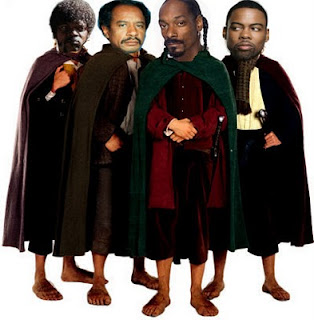 Even though the post is about something a bit different, I still felt like whipping up this nifty pic in The Gimp and sharing.

My nearly useless degree is a Bachelor of Fine Arts in Creative Writing. Yeah, I'm a certified 'artist of fiction writing.' Not that it does me any good monetarily.

I'm still plugging away at a screenplay with a writing partner, and we've got hopes that it will actually sell. We're fairly confident in it. Anyway, how this relates to gaming is in a simple trick some writers use to get a handle on who a character is and make them complex, even if they're just a minor nobody who's only in one or two scenes.

A Want is something your character is actively pursuing. It's the goal of the quest, the fortune and glory, the prom queen, a little peace and quiet, whatever it is they think will make them happy.

A Need is what will actually make the character happy/fulfilled.

For example, in the movie Predator, Dutch wants to get him and his men out alive. But he has a Need to prove himself the biggest badass. That's why, when he learns he can hide from the Predator with mud camouflage he doesn't use it to escape, he instead sticks around to kill the alien that wasted his crew.

In Stephen King's Dark Tower books, Roland has a Want to get to the Tower and do whatever he has to do there. But he has a Need to form a new Ka-Tet before he gets there.

Spiderman has a Want to stop the villains, and a Need to protect his family at all costs.

Of course, these really only work if they come up in play. So for an RPG, they should be thematically appropriate to the game being played. For D&D, a Want to become a world renowned florist, and a Need to come out of the closet to my parents likely won't affect play much at all. Save that for some weird furry LARP or something. But a Want to discover the lost grimoire of Yeffal the Mad and a Need to rescue my homeland from its serpentmen overlords is completely appropriate. And situations will come up in play where the player will need to choose between the two.

And that's what makes a character well rounded.

Posted by Dennis Laffey at 7:22 AM 2 comments