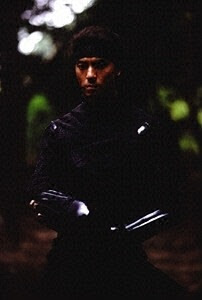 Just for the heck of it (OK, because there was a ninja movie on TV Sunday that we watched a bit of), this week's posts are (probably) going to be devoted to the mysterious masters of Sengoku espionage, the 忍者.

There's of course a lot of crap out there about ninja, but since this is a fantasy role playing blog, the crap is, if you think about it, just as valuable as the truth about ninja.

A few pointers, for the rare geek who doesn't already know this:

Ninja is the reading of the characters I posted above using the 'on-yomi' or Chinese reading. The 'kun-yomi' or native Japanese reading, is 'Shinobi-no-mono' (also written 忍の者, with the middle kana being the 'no'). It basically means either 'a person who endures' or 'a person who sneaks' depending on how you want to interpret it.

Ninja did exist, and were popular as spies and special agents. They are on record as having fought in open battle, but mainly they were not hired for their mad martial arts skillz, but to spy out enemy lands and castles, sabotage--often with fire--enemy fortifications, theft, or the like.

Now, in fiction, I'm sure I don't need to tell you that ninja are said to be the ultimate badass martial artists, have magical skills, and can defeat entire armies single handed with just a sword, some shuriken, and maybe a magical power or two. If you're into manga/anime or the live action movies based on them, then of course you'll realize that the ninja in them always have to have some unique supernatural power or schtick that would be completely useless in actually sneaking around a castle to learn the passwords or set fire to the food stores, but look really cool in a comic book fight.

And of course, despite the fact that ninja are the ultimate badasses, low level ninja abound and serve as fodder for the likes of Wolverine or other super heroes.

Oh, and then there are the Ninja Turtles, too!

Anyway, a good place to start research on ninja is actually, believe it or not (at least at the time I'm writing this) Wikipedia. The article there seems to have checked period sources and doesn't fall into Real Ultimate Power land (although if you haven't ever seen this second site, check it out as it's hilarious).

Anyway, this week I'll be posting some thoughts on ninja. I'll discuss a few famous ones, some fictional ones, some good ninja movies, and of course some ideas about using ninja in RPGs. We'll see how it goes.

Posted by Dennis Laffey at 9:52 PM