This image was posted in the D&D in Busan Facebook group and spurred an interesting discussion.

Some comments praised the old-school Tolkienesque humans and human-like demi-humans (elves, dwarves. halflings, gnomes). Others praised the more modern variety of choices. Some pointed out that even in old school games, players sometimes run odd races like frog-men or sleestak (that last would be me, in Justin's old Vaults of Ur game).
But one person made a spot-on comment. In old school games, it was mostly humans because there were drawbacks to playing the demi-humans. Especially in OD&D and Classic, you didn't have much choice (well, disregarding the supplements and home-brew). Even in AD&D, only humans had the freedom to pick any class, and advance as far as you could go in all of those classes.
So yes, I played a Sleestak in Vaults of Ur. But it was based on the Halfling class in Labyrinth Lord, so limited to 8th level. Yes, there are plenty of demi-humans in low to mid level AD&D play, but if you want to play a high level campaign, better be human (or a thief).
In 5E, there's not much incentive to play a human, other than RP considerations. The variety of races get all kinds of cool abilities. The only real saving grace for humans is the variant that lets you pick a feat at character creation. Since feats in 5E can be pretty powerful, it definitely makes up for the lack of racial abilities.

A week or so ago, I had a bunch of ideas for blog posts. Of course, this was right before bed time, but somehow in the morning I still had them in mind. But I didn't write them down, and since I've been so busy the past few weeks, they've completely slipped my mind now. All I can remember is that I had interesting ideas for things to write about here. Frustrating!

Anyway, things are going well on the gaming front. My West Marches game is coming along well. We had a great session of it over the weekend. The party managed to explore a bunch of hexes on their way to the Ruins of Xak Tsaroth, and scouted it out a bit. No one died, and my younger son got his first taste of D&D (he turns 6 in two months, so he wasn't really paying that much attention, but had fun clicking on the button to roll dice in Roll20 and enjoyed making a character).

The Star Wars d6 game is also going well. But my wife and kids are back in Korea (if you couldn't guess) so my gaming time is going to be much reduced. When it was only me, it was no problem gaming two or three nights a week. Now it's going to be once a week if that. And with West Marches on a regular schedule, Star Wars is going to be much less frequent.

Dean's 4E game is going pretty well. It is fun, despite the drawbacks of the 4E system, and I'm enjoying my quirky character.

Nate, one of my regular players in West Marches, has started a 5E game using the free content WotC has been putting on their website over the past couple of months. I didn't get to play in the first session, but I made a PC -- a human conjurer with a pointy hat as his arcane focus. Named Preston. Any resemblance to 80's cartoon characters is purely coincidental!!! Honest! 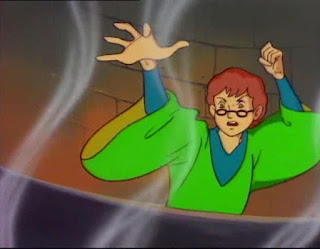 Then there are the PbP games I'm involved in on RPOL.net. I've joined too many games, I think, but players in games I'm enjoying were starting new games, and I jumped in on them (along with my previous games). I'm running two (Classic D&D megadungeon, and my d6 Star Wars stuff) plus playing a dozen characters in eight different games (in two games I have three characters each).

And then I'm still plugging away at Treasures, Serpents, and Ruins - East. Once I get the main rules set (working on the GM stuff now, which is tedious and going slow) I'll get back to work on the East Marches setting/module idea I've got. But again, with work stuff and my family back with me, don't expect it any time soon.

Dean switched his games from 5E back to 4E a few months back. At first he was still running the 5E game, too, but now he's gone to only 4E. So while I could resist playing 4E when I still had the option of 5E, now that it's only 4E, Dean got me to join.

I think I mentioned this already in the last post. He almost didn't. The first time I tried to make a character, I started looking through the options (and since my only sources are online, there are WAY too many!). For some reason, a Hengeyokai Monk seemed like the character to play. I started to make the PC. But then the WAY too many options as well as unfamiliar jargon got in the way and after maybe two hours wasted, I gave up.

Then a few weeks later, I tried again. This time with a personal character sheet to model provided by Dean, and knowing what I wanted to play already, I made it through the character creation process and created Xuan Lai, Monkey Hengeyokai Stone Fist Monk. Yeah, that's a mouthful.

The monk in 4E is a "striker" with some "control" ability, meaning that on the tactical battle map, my role is to dish out damage and set up the enemies where we can do the most damage, or else maneuver my way across the battlefield where I can do the most good. And unlike the Ranger or Rogue (or other "strikers") my character is designed to deal damage to multiple opponents more than massive damage on single opponents.

And I have to say, when we get into the tactical battles, it is pretty fun to play around and try to use my powers most effectively. And even when we're not fighting, playing a slightly less Chaotic version of Sun Wukong (the Monkey King) is a lot of fun too.

But then I hit level 2. And I had to go back to the online database to search through it to decide on my Level 2 Utility Power and a feat. And that took a good part of an afternoon. No joke.

We'll see how it goes. Like I said, playing it is fine. Fun even! It's not normal D&D, but I've read plenty of times how it's a good game on its own merits. I see that now. I still have some issues, especially since character creation/leveling takes SO long, and pretty much every level will involve choices like this.