Hypothesis: Why some players really fear Save or Die

Hypothesis: Newer gamers tend to dislike, distrust, and complain about Save or Die effects, while older gamers brought up with the math of TSR editions don't mind them so much, because of the math behind saves in d20 D&D vs. TSR D&D.

Probably not a new insight, as the numbers have been out there for anyone to look at for 12 years now, but I've taken a hard look at some of those numbers in the game for the first time myself.  Boring, but oh well.  It sheds some light on the recent discussions revolving around Mike Mearls' posts about Save or Die threats in D&D.

I've mentioned this phenomenon before.  In old school D&D, as characters gain levels, they only get better and better at making saving throws.  This is because the save numbers are a function of class and level and are divorced from the threat that forces the save.  It doesn't matter if it's a weak ass Giant Centipede or a huge honking Nightwalker that forces you to Save vs. Poison.  You've got the same chance against either.  And as you get into the mid-to-high levels, you can be pretty confident that the odds are on your side (although never completely worry free).

In new school (d20) D&D, your save bonuses increase as you level, but so do many of the save DCs that you nee to hit to make that save.  So by the time you're 5th level, you can easily save against the Giant Centipede (but likely won't encounter any) but have about as tough a time saving against the Giant Scorpion's venom as you had against the Centipede's at level 1.  And by the time you're level 17 and facing Nightwalkers, you actually probably have a worse chance to save than you did against the lesser foes, unless you've optimized your magic item purchases/feats/multiclassing to boost your Fortitude save.

Let's compare the percentage chance to save of a Fighter in BX (Moldvay/Cook) D&D, where he maxes out at 14th level, a Fighter in BECMI (Mentzer) D&D up to level 20 (maxes out at level 36 with a 95% chance to make any save), and a 3.0/3.5 D&D Fighter.  Now, these are not hard numbers where the d20 system is concerned, because stat bonuses, feats, and common magic items can boost saves.  Of course, in Classic D&D it's not that hard to find rings of protection or other devices that boost saves, too.  Also, as noted above, there's no set number against which to save in d20 D&D.  The threat is relative to the power of the source of the attack.  At 20th level, a Fighter may only face a DC 25 spell-like ability from a Balor, or a DC 40 breath attack of a Great Wyrm Red Dragon. 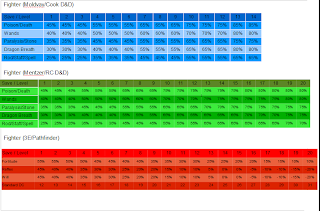 What does this tell us?  That devoid of any magic items at all, the Classic Fighter just gets better and better at making saving throws.  They start off worse in most areas, but improve over time.

If you play a Fighter up from 1st level to the "sweet spot" 4-8 range, you notice you're getting better and better odds to avoid poisons, spells, petrification, and dragon breath.  No, you're not invincible, but there is improvement.  Throw in a ring of protection or a displacer cloak, and you can be fairly confident as a player that the odds are on your side.

What about the d20 Fighter*?  well, you start out fairly good against poison or other body-affecting attacks, and decent against others.  It's likely as a Fighter you'll have a bit of a bonus to Con and maybe even Dex, improving the Fort and Ref saves.  Wisdom?  Not likely, so your Will save is gonna be right where it is (because you're not gonna take Iron Will as a feat over Power Attack or Weapon Focus, now, are you?).

As the player advances, though, the DCs quickly outpace the by-the-book bonuses to saves.  Meaning the player had better invest in lots of cloaks of resistance, stat-boosting items, and maybe spend one or two of those feat slots on Lightning Reflexes and/or Iron Will.  If you don't have all of that stuff, there's not much chance you're gonna be making any saves against Fireballs or Confusion spells up in the mid-to-high levels.  And remember, the numbers I'm using above assume low stat bonuses, so even with the magic item Christmas Tree effect, high level saves are hard to make.

So what do players who've been brought up on 3E and later games learn?  That Save or Die effects suck, ESPECIALLY at higher levels, because their character is more than likely going to fail that save.  Old Schoolers, and those who've been introduced to RPGs through the clones/simulacrums, learn that you've got less to fear from that dragon's breath (unless it's one of Frank's Large or Huge dragons!) when you're name level, and if you play into the Companion/Masters levels, you've got little to fear from any sort of special attack.

This is something that should be addressed in the discussions involving 5E, I think.

Posted by Dennis Laffey at 8:12 AM