Beast of the Week: Demodragon

Possibly because the network censors wouldn't allow a full-fledged demon prince to appear on a Saturday morning cartoon show in the 80's, Venger didn't capture Demogorgon to use against Tardos Keep.  Instead, the show's writers came up with Demodragon, part demon, part dragon, all badass.  It still has the two heads and tentacles associated with Demogorgon, but it's a big two-headed dragon with cloven hooves that breathes fire from one head and ice/cold from the other.

Let's try giving it some stats based on a combination of the Mentzer Companion Set Huge White and Red dragons.  Should make it fearsome enough!  This is a creature that only the highest level characters should face toe-to-toe.  Better hope your DM lets you find some dragonbane before you meet Demodragon! 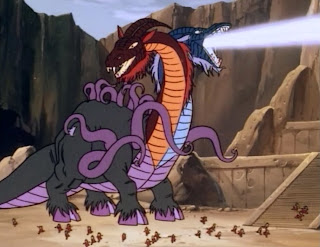 Demodragon is gigantic gray and purple-skinned dragon with two heads, one red and one blue.  It stands upon cloven hooves and has masses of tentacles sprouting from its sides.   It is said to be half demon, half dragon, and its fearsome aspect and powers seem to support that hypothesis.  Demodragon can only be hit by weapons of +3 enchantment or better, and is immune to all spells of less than 4th level.  In combat, Demodragon can use up to ten of its tentacles each round, but no more than two tentacles can be used against a human-sized or smaller opponent each round due to their size.  Victims hit by a tentacle may be grabbed on a natural 18, 19 or 20, and then squeezed for automatic damage each round.  A save vs. paralysis with a -4 penalty may be made each round to escape.  Each of Demodragon's heads can bite or breathe each round.  The red head breathes a cone of fire 180' long and 30' wide at the far end.  The blue head breathes a cone of cold 90' long and 40' wide at the end.  Each head can breathe three times each day.