Beast of the Week: Phantom Stalker

Man, I couldn't even get the Beast of the Week up on time this week.  It's been rough, that's why there haven't been any posts here since last Sunday.  The new school year started, and things are a mess at work (text books not ordered, new teachers who have no clue, new students who don't yet speak more than a handful of English words - the joys of working in a private "education" academy in Korea, in other words).

Not only that, but I've been using most of my free time to give a final proof to Flying Swordsmen RPG, which I hope to have cleaned up and released by St. Patrick's Day.  The perfect day for an Irish-descended dude like myself to release his kung fu themed version of D&D.

Anyway, the point of this post is not my neglect of the blog, it's the Beast of the Week!  Last week's Sleestak were a bit less popular than I'd imagined, but I'm carrying on with this week's Saturday Morning inspired creature, the Phantom Stalker.  Originally appearing in the D&D Cartoon episode "The Garden of Zinn" featuring one of our favorite supporting characters Solarrz, these guys caused all kinds of havok for those six kids from Earth even with their fancy magic weapons.  Let's see what I can come up with for them: 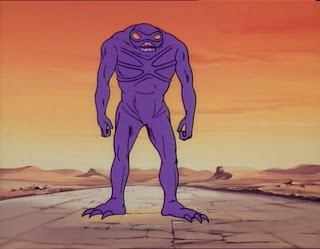 These gaunt purple humanoids with leech-like mouths are natives of the Elemental Plane of Air.  They sometimes appear on the Prime Plane when summoned by a powerful spellcaster, or near a gate to their home.  They are quite intelligent, and speak Common, their own language and that of Djinn.  Phantom Stalkers can only be hit by magical weapons or spells, and magical weapons only do half damage.  Phantom Stalkers can shift from solid to gaseous form at will, and even retain a semi-solid state that allows them to grab onto and carry victims within their cloudy forms.  To grab a victim, the Phantom Stalker makes a normal attack roll.  The victim may Save vs. Dragon Breath at -2 to avoid the grab, otherwise they are at the mercy of the Stalker that captures them.  Phantom Stalkers also have the ability to disguise their form, in a manner similar to Dopplegangers.  Spellcasters often employ Phantom Stalkers in ways similar to Invisible Stalkers and Aerial Servants, as they make excellent spies, assassins and hunters.