In the Board Game Group, Jeremy has maybe one or two more players interested in joining Josh's Gamma World game.  But according to Alex, who I talked to yesterday, Josh is thinking of stopping after this module rather than continuing the series.  What's all this got to do with ninja?  Not much, I can hear some of you thinking.

But Alex is again wanting to run his go-to system, Palladium.  He plans to mix TMNT with Ninjas & Superspies. 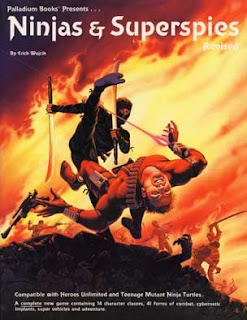 Right now he's thinking of running a mercenary campaign, possibly using elements of Recon as well.  I told him yesterday that I'd be all over this game if he actually set it during the Vietnam War.  I grew up on Tour of Duty, Platoon, Full Metal Jacket, and read quite a few histories of the war in Jr. High and High School.

Anyway, even if he doesn't set it in 'Nam, a TMNT/Ninjas & Superspies game could be pretty fun.

Posted by Dennis Laffey at 8:41 PM