Last night we got our Gamma World game off the ground.  We also had a new player join us, Jeremy.

It took quite a bit longer than we'd hoped to roll up characters.  A large part of that was because we were playing at my place, and my son kept interrupting the process.  So while I had thought I'd roll up my guys quickly and then help the others, it was more of me helping them while trying to keep my son from stealing dice or dancing on the table, then finishing up my characters last.

Despite the late start, I think we made some good progress into the module.  We have been given several hooks and a small sandbox area to explore.  We focused on the 'main task' but I think we'll be sure to check out some of the other hooks before we finish.  There wasn't a lot of combat.  We fought one radioactive bird which had no loot, and got attacked by some gamma moths later, which resulted in Pat's Cactus getting radiation sickness and almost dying.  Most of the other encounters were role playing affairs.

Towards the end, we were all also starting to get a handle on who are characters are.  Jeremy jumped in early with that, making his "Minotaur" into a noble, hard working guy, and his Esper into a crotchety old coot.  I of course made my Cougar into an over 30 female, and since she had an Int 5, she's none too smart so I started trying to make her cat-like instincts drive her at inopportune moments.  My Examiner took a little longer to get into, but I think he's a curious and friendly fellow who has a dream to see civilization restored (he's a Restorationist).  Pat's two characters are a buddy team, sort of like Nobita and Doraemon (if you know who they are).  His Cactus even has a kangaroo pouch mutation. 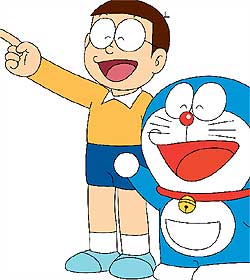 Posted by Dennis Laffey at 9:13 PM