I went ahead and did it.

So, I'm about to start keying some locations on the second level of the Megadungeon.  As with the first level, I'll mostly be starting with some special locations, and the locations of the 'keystone treasures.'  Then I'll fill out the rest of the rooms with a short bit of room description, plus any monsters, traps, other specials, or treasure.

Anyway, you know how there are those who put down the whole idea of the Megadungeon as 'orc and pie' silliness?

Why?  Well, as old Jack Burton always says, "What the Hell." 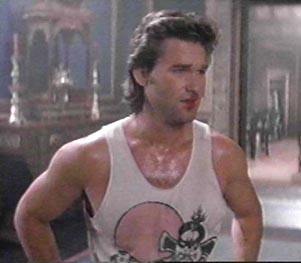 Magical Pie
These pies are always hot and delicious when first discovered.  Each pie mimics the effects of a certain type of potion if eaten while still hot (pies cool within 2d4 Turns of being discovered).  One pie may be sliced into at most 8 pieces.  Eating multiple pieces of pie will not have extra effects, except in the case of a healing pie.

*My Megadungeon orc's pie is a gooseberry pie, but it's non-magical.