Finally got around to watching this one this weekend.  I missed it when it hit Japanese theaters (busy with family stuff, study, what-not), and then it didn't come to my VOD for a long time...  Anyway, I watched it at long last.  And it has been out long enough that there will be spoilers in this review.  If you haven't seen it yet, don't read past the picture/line break below.

Now, long-time readers of this blog, and those recent folks who have had a look at Flying Swordsmen and have read my posts about my WIP Chanbara should know that this sort of film is right smack dab in the middle of my wheel-house.  Asian fantasy?  Check.  Samurai period piece?  Check.  This is exactly the sort of thing I'm trying to do with Chanbara.

And overall, I was not especially impressed.  It's not a bad movie.  It's exciting and makes you care about the characters to a certain extent.  It has impressive CGI, and makes the fantasy elements come alive.

But at the same time, I didn't care that much about the characters.  Keanu was his normal wooden self.  I can forgive that, because of Ted Theodore Logan and Neo (roles he excelled at due to not needing to appear overly intelligent/emotional), but most of the Japanese cast failed to really draw me in.  Sanada Hiroyuki, Shibasaki Ko, and Asano Tadanobu are all decent quality actors in Japan - of course, they were performing in a second language (and with 16 years of ESL instruction experience in Japan and Korea, I understand that well!).  Kikuchi Rinko did a great job as the witch.  The fat samurai/ronin did a great job with a minor role.

And that brings up a point that may have biased me.  I've been watching plenty of Japanese film lately (samurai/ninja movies for Chanbara inspiration, Godzilla movies with my son just because).  Seeing feudal Japan portrayed by actors I know from my time in Japan and those actors speaking English took a bit of getting used to.

47 Ronin (follow the link to read the original version), above all, is a story about character.  Character as in strength of personality.  The movie's flaws are not in the addition of fantasy elements or making the star a "half-breed peasant/slave."  The fault lies in not adequately showing the true resolve of the 47. 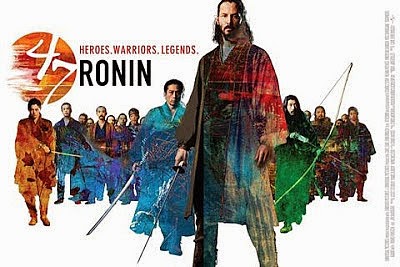 OK, so the beginning of the movie, the narrator tells us that to know the story of the 47 Ronin is to know Japan.  I'd say that holds true for the original tale, but not for this film.  At least to an extent, anyway.  The original story is just as much about the disgrace Oishi was willing to suffer in order to lure his enemy into a false sense of security as it is about the actual vengeance of the lord.

In the movie, we gloss over the year between the death of Lord Asano and the 47's vengeance.  By that simple move to "get to the action" we lose the heart of the story.  And with the heart gone, we lose any ability to really get to know Japanese culture.

Instead, we get a standard Hollywood visual feast, full of oddities (the skull-tattooed Portuguese sailor on the movie poster, who's got about 2 minutes of screen time at most), romance (OK, want to sell tickets to women? Forget about hackneyed romance subplots, just get some of the Ronin besides the fat guy to take off their shirts...worked for the Thor movies, didn't it?), and character plot point hang-ups that just don't have the oomph of the original story - but maybe look better on screen and are easier for a Western audience to get (the arranged marriage between Lady Mika and Lord Kira, the ronin needing Keanu's character Kai to fight the witch, and Lord Kira fighting to the end instead of hiding in a woodshed), not to mention a "happy" ending (Lady Mika gets her province back, Oishi's son is spared by the Shogun at the last minute so as not to deprive Japan of his bloodline).

So, sorry, Hollywood, this should have been the perfect movie for a guy like me.  I rate it as only average.  Maybe I'm actually not the target demographic for this movie - although I think I should be.

On a positive note, when I release Chanbara, I will suggest people watch this movie if only for a good lesson in how to blend fairly mundane/quasi-historical adventure stuff with the fantastic.