Getting right into it this week, looking at pages 39-42 of the Players Manual, the descriptions of MU spells.  If I skip a spell, it's because I didn't find anything worthwhile to comment on.

Charm Person - this is actually a long description with fairly succinct directions on what the "charm" effect is.  The charmed creature will defend the caster from any dangers.  Full stop.  If you speak the same language, you can give it other orders, but it may resist depending on its nature.  Charm is not mind-slavery, but it is a free bodyguard at least.

I like how the description of the spell gives some general ideas about what sorts of creatures can be charmed, then says figure out the specifics by trial and error!  Don't see that at all in modern game design, which is a shame.

Floating Disc - back in the day we gave this spell a lot more utility than I've seen most people give it.  It depends on how you interpret the line "The floating disc is created at the height of the magic-user’s waist, and will always remain at that height."  Will it always remain at the height it was created at?  If so, you could use it as a floating bridge to cross chasms.  Will it always remain at the height of the magic user's waist, moving up and down when you go up stairs?  Climb on and get a free lift to a high place, or hang over the edge to get a free ride down, as the disc moves up and down trying to get to where your waist is now.

Hold Portal - a variable duration, 2d6 Turns.  I like that, and think more spells should have variations in duration (other than X turns/rounds + 1 per caster level).  This comes from early exposure to the Wizards, Warriors & You books, I think.

Light - we're already exposed to the offensive use of the spell, blinding creatures.  I guess it had become SOP for many players by '83.  And the range is 120', that's fairly considerable, since I think most times it's cast it's on the immediate area.  I'm now thinking of uses for signalling or distracting by creating a light far away from the group...

Magic Missile - again, with the debate over duration, 1 Turn or 1 Round?  The spell duration line says 1 round here, but reading the text, it moves with you and can't be touched, implying a longer duration.  But again, at high levels, a 36th level MU could create 15 missiles per spell, and memorize it nine times, casting them all before entering some room and sending them all blasting at once at any creature, auto hit, no save, for damage that could take out anything in the game.  Of course, you do have the pesky problem of actually making it to 36th level...

Protection from Evil - this spell doesn't provide a lot of extra protection numerically, but it can sure be a life-saver.  Enchanted creatures (here defined as those only damaged by magic weapons, nothing about controlled, charmed or summoned creatures) can't touch you until you attack (anything, not only the creatures being hedged out).  This means you can walk right through a room of gargoyles or spectres without damage.

Shield - shorter duration that Pro. Evil, but a whopping AC 2 vs missile weapons and AC 4, not bad, against hand to hand attacks.  And it gives a saving throw if targeted with magic missile spells.

Sleep - the powerhouse spell of level 1, and it's also got the random duration.  Of course, as the description suggests, sleeping creatures can be instantly slain, and that never takes more than the minimum 4 Turns... 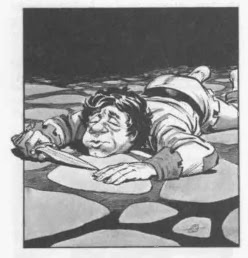 In my earliest days, the 4+1 HD limit (that of ogres) made me conflate the restrictions of Sleep and Charm Person, so that only humanoid creatures that could be charmed were affected by this spell, not animals or other monster types.

Continual Light - as Light, only double the area and brighter...but NOT as bright as daylight, so it won't cause penalties for orcs, etc.

Detect Evil - as with the Clerical version, it detects intent to harm the caster.  It also detects "evil enchantment" which could only mean cursed items, right?  That could take some of the fun out of the game right there.  At least from a DM's perspective.  As a player, I think I'll start using this on new magic items discovered before their use and see what my DM thinks!

Invisibility - wow, a whopping 240' range!  Again, I've usually only seen this spell used short range, on the caster him or her self.  I can think of some useful possibilities for that, and my current MU character actually has this spell, unlike Detect Evil... 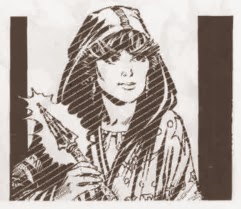 ESP - the garbling side effect is underused, IMO.  If there are two or more creatures in range in the direction concentrated on, it takes twice as long to zero in on the mind you wish to spy on.

Detect Invisible - nothing related to the write-up worth commenting on, really, but just a thought I had the other day while walking on the street and my son was making up super powers for himself.  If someone could see all invisible things, wouldn't they be blinded by air?  Best not to overthink the magic spells.

Knock - I like the note at the end, that if a door is barred and locked, both will be opened.  Basically, cast this and that puppy is coming open.

Levitate - you can carry an unencumbered companion while levitating.  Cast Floating Disc as well (depending on how you rule it, see above), and two or three more companions can ride that (up to 500 lbs), and a party can slowly ascend or descend some hazard.

Locate Object - we NEVER used this spell back in the day.  I have no idea why, as I now realize it is one of the most useful spells for dungeon delving period.  As long as you know what you're looking for in the dungeon, anyway...  It does have an unfortunately shot duration, though.

Mirror Image - I don't know why, but this is my favorite 2nd level spell.  Most NPC magic users I create will have this spell. 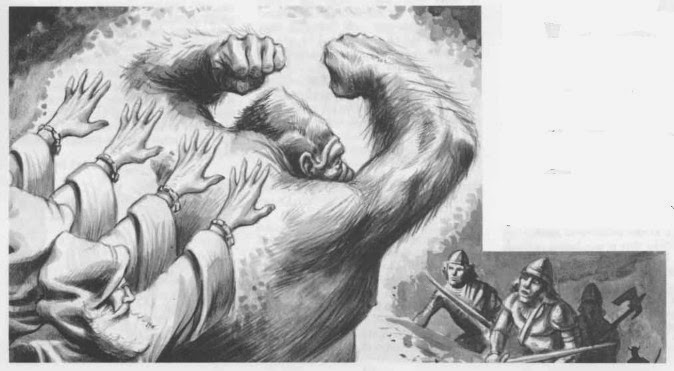 Phantasmal Force - a potentially devastating spell, if used creatively, or useless depending on how big of a jerk the DM is.  I tend to encourage creative use of illusions, but my players rarely use the spell.  There's a caveat in the spell that rarely gets enforced IMX, that if the caster has never seen the thing they're making the illusion of, the victims get a bonus to their saving throw.  Of course, I've also had players try to work into their back stories world travel so they can always pull out the "of course I saw it as I traveled through Kreblachistan with the caravan when I was 0-level..."

Web - I just did the math, 48 Turn duration is 8 hours.  Wow.  And I just noticed that burning webs inflict 1d6 damage for two rounds, which I've also always used for flaming oil, although the rules, I believe, say 1d8 per round for oil.  I may have gotten the two mixed up early on.


And there you have it, folks, my thoughts on reading through the MU spells in Mentzer Basic.

Posted by Dennis Laffey at 3:22 PM