Another busy weekend kept me from posting this earlier.  Sorry to keep you all waiting.

The Thief class is controversial in some quarters.  Some don't like the percentile chances for skills (starting too low, they say), others don't like the "larcenous" type of character (stealing from the group causes in-character and out of character trouble), and some don't like the fact that they are frail at low levels and, they claim, useless at high levels (when magic can do the same job without the potential for failure).

But it has always been my favorite class to play.  And it was musings on the Thief that brought me back to old school D&D, especially (I know I've said this multiple times before), those of Robert Fisher.  So, with that said, let's take a look at Frank Mentzer's presentation of the class. 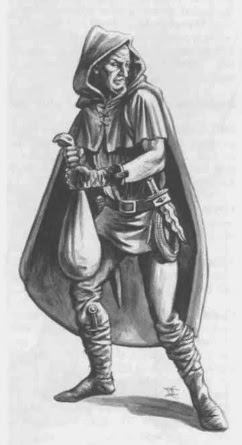 The initial description starts off by telling us that Thieves get by with their special abilities, and that Thieves are the ONLY characters that can open locks and find traps without magic.  That goes against the OSR conventional wisdom, one of the reasons some people ditch the class altogether.  It also tells us that while they can and do steal, it's best not to do so from other members of the party.

We get some good evocative description of the Thieves' Guild and a Thief's place in society (cue Garth Brooks' "Friends in Low Places").

Next, we get some solid advice on how to play a Thief.  Avoid melee combat.  Try to find ways  to make your special abilities useful.  Get a ranged weapon.  Remember that you can use your skills over and over, while magic spells only work once.  Sneaking around and using wits to stay alive is your goal, and it is a challenging one.

All in all, good advice.

The next page has a description of the various Thief Skills.  One interesting note right off the bat is that according to the book, the DM always rolls for the skill.  In my games, and those of many DMs I play or have played under, the player often gets to roll for many of these skills.  DM rolling allows for a fudge factor when opening a lock is critical to the adventure - yes, poor dungeon design, but if you're running a module you might not think to change it before hand.

Open Locks: May only be tried once per lock, and if you fail you need to gain a level before trying again.  Obviously this rule came about from Megadungeon style play, where you would have a chance to return and try to open a lock again after gaining a level.  Once the "quest" style adventures became more popular, it's no wonder Thieves fell out of favor compared to a Magic-User with a Knock spell.

Find Traps: Again, only one roll per trap.  Because I've taken to using this as more of a "trap sense" ability in my games (with descriptions of search procedures by any character likely to find a trap and this skill as a back-up), any more I do the rolling, although I have been giving repeat rolls if the trap isn't noticed and isn't set off, but the Thief returns to the area again.  Back in the day, I and other DMs I knew always asked the player to roll this one.

Remove Traps: And again, only one roll allowed per trap.  Nothing said about traps going off if the roll fails.  I remember keeping to the one try rule in our early games, but later when, thanks to the influence of AD&D, we instituted a chance for the trap to go off if the roll failed badly enough, I allowed re-rolls.  Press your luck!  Of course, knowing how a trap is triggered and what it will do allows for creatively springing the trap without harm to the party in many cases, so rerolls aren't vital.

Climb Walls: Obviously, this skill has a built in failure penalty, falling.  But then this skill also starts out with a high chance of success.  One thing I'd forgotten is that falls during a 10' climb (i.e. falling 5') cause only 1 point of damage, no roll needed.  One other important point is that the description does specifically say that this ability is for climbing steep cliffs, sheer surfaces, etc.  Implying that other characters can engage in other types of climbing.  Of course, it's not until the Expert Set IIRC that it's spelled out explicitly that this is so.

Move Silently: Always seems successful to the character.  Because the DM rolls, the player won't know until the monsters react to the character.  Of course, in play failure tends to get described as stepping on a twig or something slapstick happening, so the player knows it's a failure.  But then the player is quite often making the roll, as well, so they do know the result already.

Hide in Shadows: Ditto of Move Silently.  Also, it specifically says that movement is possible, but not attacking.  I interpret that to mean remaining hidden after an attack, as being hidden in shadows is one of the best ways to set up a backstab attempt.  Also, the wording is a bit vague (hiding in shadows or "neutral concealment"), but it does imply that the Thief isn't hiding behind anything and is instead using darkness and camouflage to hide, and anyone can hide behind the curtains or a box.

Pick Pockets: Do so at your own risk.  There is a penalty for failure other than not getting whatever it was you were after.  Fail by more than double your chance to succeed, and the mark catches you.  Fail by less than double and you're prevented from success but not caught.  But if you get caught, you could be in trouble.  The example given has the PC trying to steal from an NPC retainer.  I wish a better example had been given of trying to pick a monster's pocket, to show how the skill could be used to aid the party rather than just the Thief's bank balance.

Hear Noise: This roll is on a d6, so that it integrates smoothly with normal listening checks (1 in 6 for other human classes, 2 in 6 for demi-humans).  Of course, the book doesn't say that.  It just tells you that you can listen at doors or for approaching footsteps, and don't bother trying it during a loud battle.

After describing the special abilities, we get a brief bit on how to use them properly.  The player needs to look for a situation where they can be used, and simply says to the DM, "I want to X."  The example given of improper use shows that it's pointless to try and hide in shadows when the monsters have already spotted you.
Finally, we get a description of Backstabbing.  Aside from the mechanics, I think it's pertinent to read the example, which has a DM making a judgment call about whether the Thief can try a backstab or not.  And a note at the end that in battle, there's no need to "move silently" as battles are noisy, but if no battle is happening it may be necessary to gain the backstab bonus.

Next time, we start on the demi-human classes with the Dwarf!