Ah, Magic-Users.  I know in the OSR that lots of people like to dispense with the Thief (not in OD&D!  Percentile skills suck!  Everyone should be able to find traps!) and the Cleric (Van Helsing + Templar Knight isn't in any source material!  Village priests shouldn't be monster slaying!  Heal-bot!), but in my opinion, no class causes more "game balance" discussion across editions than the Magic-User.

Frank is straight up about the MU class in his description.  This is the most challenging, complex character class in the game.  It also starts the weakest, but becomes the most powerful (what's these days known as the Quadratic Wizard).  There's not much for you to do in combat, except hang back and try to stay alive.  But if you can manage that survival at low levels, you get to experience the awesomeness of the class. 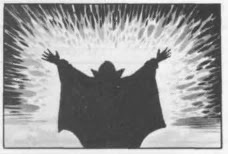 Into the nuts and bolts description of the class, we're told that MUs may not use armor or shields.  Not that they cannot or don't know how, only that they may not.  Feel free to interpret that as you will.  We're also told that they can only use a dagger as a weapon.  No explanations here, either.  Simply a restriction on the class.  I know as a kid, I just accepted that.  It was a game, games had rules.  These were the rules.  I wasn't thinking of the game as a simulation of reality - or even as a simulation of an actual fantasy world.  It was just the drawback you take on in order to be able to cast spells.

Next, we get what is a fairly standard warning in various D&D editions.  Don't mix up your character's level with spell levels.  They're different things.  I don't remember exactly, but I can vaguely remember some confusion among friends that I tried to teach the game to about that.  None of the people who were confused (if I'm remembering right) became regular players.

On the next page, we get a detailed description of spell books, learning spells, and spell casting in the game.  First off, we're told that the DM will inform the player of what spells are in the spell book.  It's been a LONG time since I've played that way.  We did that early on, but quickly made the adjustment to letting the player choose what spells they would have.  I wonder how many modern players would revolt at the "DM Fiat" of having their spellbooks dictated to them.

We're introduced to the idea of a tutor NPC who teaches the MU the spells they gain each level (one per level), and told that until the PC reaches 7th level, they get spells from this NPC wizard.  I've tried making NPC magical tutors before in games, but players were never really interested in exploring the relationship with the tutor in game.  Maybe one day I'll try it again.

We're told that MUs never, but NEVER share spells.  Again, in practice, I've rarely encountered this between fellow adventurers, and spell knowledge is a good bargaining chip with NPC parties.

Scrolls are introduced here, and players of MUs are going to obviously be keen to find scrolls.  We're told that an MU may add a spell to their spell book from a scroll (no time or cost listed to do so) if it is of a level they can cast.  If the spell is higher level, the MU can cast it from the scroll, or save it for transcription later.  Which reminds me that I should put a couple of scrolls of Power Word Kill or Teleport in my Megadungeon's upper levels just to see what the players do with them when they find them...

The spells listed are to be considered "per adventure" at these levels, but as characters gain power and go on longer adventures, the MU is advised to buy a mule to carry the spell book so that spells can be relearned every day.  It's interesting that Frank uses the term "learning spells" rather than 'preparing' or 'memorizing' like in other editions.  As he notes, the MU's brain is like a blackboard, and casting a spell literally erases it from their memory.  In this system, the MU actually has to learn the spell every day!  That's actually an interpretation I like for Vancian magic.  Glad I reread that!

Oh, and of course there's again a note or two about how players don't need to learn any rituals or say any special words to cast spells in the game.  Satanic Panic!

I'll wrap up this post with one last note, and I'll do the spell lists in my next post.  In the third column on page 38, we actually get a description of the magic missile spell, saying that when cast the arrow follows the MU around for one Turn until used!  Man, I'd completely overlooked this years ago when it was a big debate on Dragonsfoot (which I mentioned last post).  I'm still of the opinion that a 1 round duration is better for the spell, but we've got it from Frank himself that that's how he intended it (and a quick check of Moldvay Basic also shows a "1 Turn" duration).  Interesting.

More on 1st and 2nd level spells next week!