Caught part of Serenity on TV this morning.  We'd just gotten to the part where the Reavers have attacked Sheppard Book's settlement when my son changed the channel and didn't want to give back the remote control.  (He's 3, he wins at that sort of thing, because he just can't be reasoned with.) 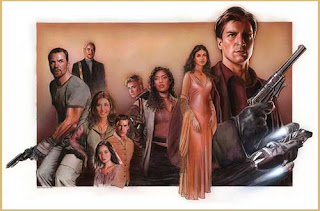 And there may be some gaming tonight, but it's another new guy wanting to run 4E.  Will my troubles never end?  [If this new guy gets his shit together, though, I'll play.  Not my preferred game, but I'll take it over nothing.]

Hang in there, True Believers!  We'll get Josh's Gamma World game going again, and I'll get some play-tests done on Flying Swordsmen RPG, and maybe even get some Star Frontiers or something worked in there, too!