Dr. Half-love, or how I learned to stop worrying and love the halfling

Back when I first got the Mentzer Basic Set for my 11th birthday, I still hadn't read The Hobbit or LotR.  None of my friends had, either.  And Elmore's art really played a big part in how we viewed the Halfling. 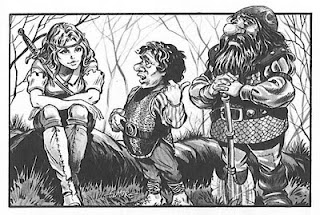 OK, not so bad here.  The chubby Halfling is complaining to the cute Elf chick about something the Dwarf obviously did but is pretending he didn't.  But the other images of Halflings in the set are of one running from a big, shadowy monster, and of one getting put to sleep by a Magic-User (probably Bargle).

We also had all read Dungeon of Dread, the first Endless Quest book, where wimpy and cowardly Laurus the Halfling is the hero Caric's sidekick. 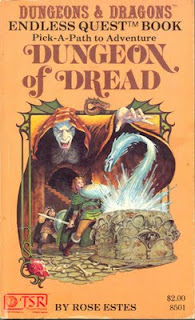 So we didn't have the most heroic image of Halflings in our early games.  And they tended to be used as the butt of jokes.

One summer vacation day, our library was playing the Rankin-Bass animated Hobbit in the background while they had some other activities going on.  So I saw parts of it, between checking out the books on Bigfoot or reading compilations of Garfield comics.  I don't remember much, other than it was on, and the blue elves were freaky.

After a few years, one guy I knew but didn't hang out with so much (Killingmachine spent more time with him) named Bryce had read The Hobbit and LotR, while I had gotten into the Dragonlance books (the original Chronicles trilogy was a step above quite a bit of the fantasy drivel available at the public library that I was scarfing up).  We had a debate once about the merits of the two, even though I had no idea what Tolkien was really about.  It starred Hobbits, who are Halflings, and we all knew how lame they were from D&D.

Then George Lucas came out with Willow.  It looked like a kick-ass fantasy movie, but it was called such a girly name and the main character was a Halfling.  Of course, eventually I saw it, and it was a fairly kickass movie, even though it was about a Halfling.  Madmartigan made up for that.

In high school, Killingmachine read The Hobbit in his English class.  He told me there was actually some good stuff in it, such as the Mirkwood spiders, Gollum, and Smaug.  That got me to read The Fellowship of the Ring, and it also had some good stuff in it.  Ringwraiths, barrow wights, killer trees, goblins/orcs, a Balrog, more Gollum!  Great stuff!  Maybe I'd been wrong about Bryce.  (insert Afterschool Special style lesson learned moment here).

About the same time, I rolled up a character with a 3 Int, and an 18 Dex.  He had a high enough Con, so I made him a Halfling.  Farley the Halfling.  He had amazing AC 0 - platemail plus Dex bonus, a short bow - with Dex and Halfling bonus to hit made him very accurate, and the ability to hide if need be.  Of course I played him as this happy retard who would always talk about how he once "shot deer like this" while picking off whatever targets he was against.  No matter how many orcs, trolls, dragons or vampires he helped slay, it was always that deer he was proudest of.  Dumb as a brick, but friendly and helpful (in his oft mistaken way).  I realized that the Halfling didn't suck, and could be quite fun to play.

Since then, I've played a few here and there.  They're still not my favorite Classic D&D class, or my favorite AD&D race, but I do still get an idea for a fun Halfling every now and then and have at it.  I'm currently playing one in an online RPOL game, and so far he's been pretty fun to play as well.

Long story short, I'm really looking forward to the Peter Jackson Hobbit movies.  My son, however, wanted to watch the Rankin-Bass Hobbit with me yesterday, but about the time they got to Rivendell he got bored, ran into the bedroom, and called me to come play with the dragon toys with him.  Well, he's only 3.  He'll learn!