Gaming with the Boys in a Galaxy Far, Far Away

Instead of more procedural D&D, the boys wanted to play some WEG d6 Star Wars today. Even though it's not the sort of game you even want to try procedural play with, I agreed despite not having anything planned. I had a fairly simple scenario cooked up in my head (a simple rescue mission).

But then they threw the curve ball. Despite my older son really being into this Mandalorian bounty hunter game on ROBLOX these days, neither wanted to play their Mandalorian characters. They wanted to play jedi. Of course. And since I'd set my game in the Rebellion era, there are already to many jedi running around in the game. And I should have been prepared for this, since they did ask back in December if they could have jedi PCs.

But after a bit of discussion, we decided to roll up the new characters and play in an unconnected game, with an "anything goes" Star Wars universe. Completely cutting the strings from canon. If we want to have to outwit Dooku and battle droids one session, then tangle with Kylo Ren the next, sure, why not? The Empire, Rebellion, Galactic Republic, etc can all just coexist. Sorta like the RTS Star Wars Galactic Battlegrounds (which we've played a bit).

So my younger boy asked if he could play a "bulldog man" (yes, he's got a thing for bulldogs these days) jedi, and I said sure. We used the Minor Jedi template and made a few skill picks and some equipment purchases, and found a picture he liked online. 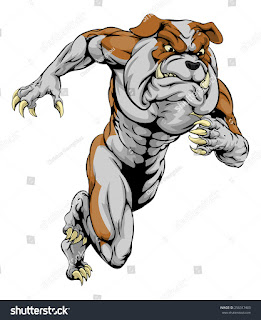 My older boy decided he wanted a zabrak jedi, one with yellow markings and a yellow lightsaber. We used the Young Jedi template for him, and he's on a quest to get a kyber crystal for the yellow lightsaber he wants. 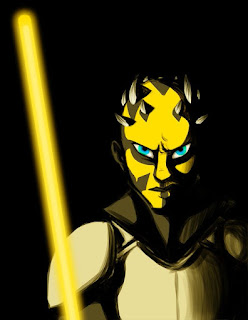 That took quite a while, actually, because the boys decided to see what was on TV at the time (Men in Black III) and spent more time watching that than making decisions about their PCs.

After dinner we played a little. I had Yoda send them on a quest to some ruins to look for kyber crystals. I meant to have them encounter some RP challenges along the way, but my 1st son asked for a combat, so I through some battle droids at them. Too many battle droids. Their game stats are much tougher than the way they fight in the movies! I dropped eight, but had them in two ranks and only the first rank was firing.

Son #2 did try to be clever, trying to use telekinesis to attack them with his lightsaber from far away, but at beginning level, there just aren't enough dice in the pool for easy lightsaber combat. Son #1 had some success shooting with his blaster, damaging two droids, but then he took an unlucky hit and was incapacitated in one shot. Son #2's PC grabbed him and ran.

I looked up the natural healing rules (neither had bought medpacs despite my recommendation), and noted that the zabrak would die if he rolled 8 or less. He rolled a 7. My son was pretty upset, but held it in pretty well. It was bedtime by then anyway, so we wrapped things up, I said it was just a training game, gave them some character points, and said we'd try again another time once I'd had some time to plan a proper adventure for them.

d6 System is definitely NOT the sort of system where you just want to throw random monsters at characters, especially when they're just starting out!