I mentioned this in my post the other day, and figured I'd write a dedicated post about it.

A few weeks ago, I was checking out the NES Classic console - a mini emulation box shaped like the good old 8-bit NES. And of course that led me to similar machines for SEGA Genesis, SNES, PSX, etc. If you don't know, these come with an emulator program and pre-loaded with a selection of the "most popular" games for that system.

Well, I've been playing emulated games for decades now, so that's nothing new to me. But the idea of having an emulation box like this with proper controllers (the touch screen emulator on my phone is less than ideal for games where that tactile sensation helps game play).

And I came across ads for the Super Console X. It's an emulation box -- actually a smart TV box preloaded with EmuElec and lots of ROMS for a wide variety of systems, including arcade and old PC games, in addition to most home consoles. This thing even has a few systems I'd never even heard of, or had only heard of in passing and forgotten, at least. 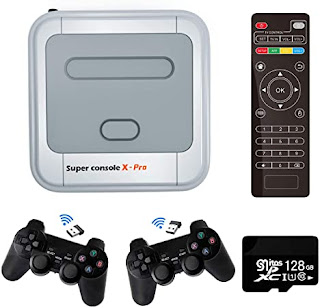 Yeah, of course I bought it. It was around $100, and takes up a lot less space than five or six of the officially licensed ones would. Is it legal? I'm sure it's not. I doubt the company is paying anything to any of the companies that made all these old games. And while I'm not opposed to giving these companies some more of my money, like I said, this is just a lot cheaper and more practical. And my wife was on board with it, so that's a plus. I'm pretty sure she would have said "No" to me shelling out close to $500 for all of the individual licensed devices...and they wouldn't have had all the games I'd want to play, as well.

Is it nice? Well, it's not perfect. But so far, we've been having a lot of fun with it. 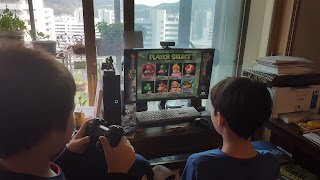 Here are the boys playing some Mario Cart.

One of my old favorites was Tenchu for the PSX, which did NOT come pre-loaded, but thanks to the internet, I got Tenchu and Tenchu 2 and loaded them on. There was a third PSX Tenchu game in Japan called Shinobi Hyaku Gaisen which was made of 100 fan-created levels which I had back in the day, but I couldn't find an ISO of that one.

I did have one or two issues with it so far. Gauntlet and Gauntlet II for MAME don't work. I need to replace the ROMs, I think. A YouTube tutorial mentioned changing the video resolution for different systems to get a better picture, but when I tried adjusting that, it messed up the screen. I managed to fix that. There may be an issue with game saves, which would make replaying RPGs like the old Gold Box D&D games (yes, they're on it) impossible. But for more casual games, like most old arcade, Atari or NES era games, or things like Mario Cart or Street Fighter II, we're good to go!

Posted by Dennis Laffey at 4:29 PM