Wow, that's a generic title! There are tons of monsters in D&D that fit the Halloween season.

But I'm going way back for this one. 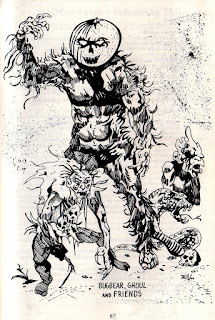 I've got a Jack-o-Lantern monster (from my old Beast of the Week series), but I'm thinking that in my upcoming session of West Marches, I need to throw in some of these guys. Pumpkin-head bugbears. The group has fought regular bugbears before, but I think this time I'll throw in this twist and see what happens.

I don't remember if it was someone's blog, or maybe one of the D&D themed videos I was watching on YouTube, but recently someone was complaining about the overuse of bugbears in modules. Well, slap a pumpkin head on them and I think there's less reason to complain about them appearing so often.