I'm on vacation. The dissertation is finished (a few weeks ago actually, graduation at the end of February). Next week, I need to start editing down the dissertation into three or four publishable papers. But for now, I'm working on Chanbara.

I've made a few minor class edits based on play tests. I've added a couple of monsters, and changed speeds of characters and monsters to match up with Classic D&D. I made some changes to poisons based on an old post of Alexis' from last November at The Tao of D&D (if you're reading this, it's not exactly your method, but the new system was influenced by yours). Oh, and I've got wandering monster and wilderness encounter tables! It's one thing I completely forgot to add to Flying Swordsmen.

I'm thinking of possibly splitting the book in two. A player's book and a GM's book. Maybe. The draft text is sitting at around 70 pages, but there are some more things I could add (like more monsters and magic items, more examples of organizations that can serve as allegiances for PCs), and a few things I might cut (like the campaign setting, which I could expand and release separately). If I go with the two book approach, they'd both be pretty short though, even if I use ample amounts of art. And I have collected ample amounts of public domain art to use. But I doubt I'll be making any box sets, so I'll probably stick to the single volume approach.

Tonight, I pulled up GIMP and noodled around with a more simplistic (Zen) cover idea, trying to make it look like an old Japanese block print rice paper book. Lee Barber, if you're reading, I could use your graphic design criticism on this! 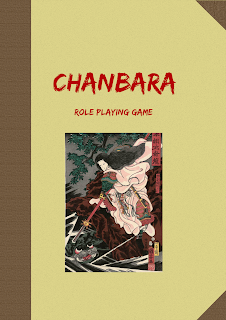 It could be even more Zen by removing the image and subtitle, enlarging the title, and lowering it a bit on the page. But I'm not sure if people who don't read the blog would have their interest piqued or not by such a simple cover. 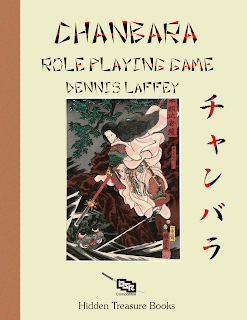 For reference, here's the previous version I came up with. I liked it at the time, but now I agree with Lee that it's just sloppy and too busy. I like that picture of a female samurai battling a giant spider, though.