I just spent a few minutes (didn't take long) comparing the eight magical traditions in 5E with the various spell schools in 1E, and how in Dragonlance, your wizard's robe color determines which spell schools you can know/cast. And it turns out they easily map together, giving five of 5E's eight groups to each robe color. Also, the influence of the three moons seems like it will be pretty simple to apply to 5E's Wizard class.

Class: Wizard of High Sorcery
Except as noted below, identical to the basic Wizard class.

3rd Level: Robes
After achieving 3rd level and before gaining 4th level, the wizard must pass the Test of High Sorcery, which is pass or die. The wizard who passes joins one of three orders, White (good), Red (neutral) or Black (evil) and is issued appropriately colored robes. From this point forward, they may only cast spells of the spell schools allowed as valid choices for their Arcane Tradition. Spells of prohibited schools in their spellbook are unusable, and the wizard may select any one such spell, if any, to be removed and replaced with another spell by the Conclave of Wizards upon completion of the Test. 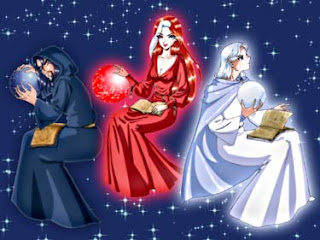 Renegade Magic Users
A Wizard who continues to advance in level beyond 3rd without having taken the Test of High Sorcery is considered a renegade. The renegade may cast spells of any spell school regardless of alignment, and the moons have no influence on the renegade's spells. Any Wizard of High Sorcery who encounters a renegade is bound by the Conclave of Wizards to attempt to capture or kill the renegade.