So, having skimmed over certain parts of Dragonlance Adventures (the 1E sourcebook), the 5E PHB, Sword Coast Adventurer's Guide, and several of WotC's Unearthed Arcana articles, I feel like from a player perspective doing Dragonlance with 5E wouldn't be too hard.

It won't be an exact fit, but then I didn't expect it to be. But by limiting the races, classes, and class specialization paths (and switching a few around), it could work. 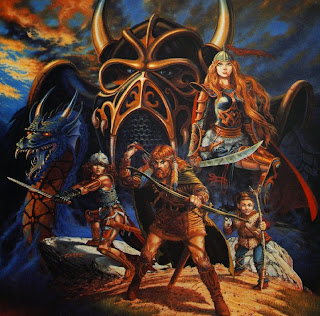 Races: Human, Elf (no Dark Elf/Drow), Half-Elf, Dwarf (both subraces OK), Halfling (Kender subrace only, abilities taken from Play Test materials), Gnome (Rock Gnome subrace only, expanded tinker stuff from DLA), Minotaur (using Half-Orc race - DMWieg pointed me to a UA Krynn Minotaur, but just using the half-orc seems easier to me, although I will give them the horn attack from the UA class).

That's fairly simple (although I wonder if players would go for it if I also instituted 1E style race/class restrictions...).

From the DM perspective, it's a little harder. I printed up the "important" parts of the first two modules. The first has a bit of a sandbox feel already (if I ignore the plot roadblocks built into many encounters), plus the ruins of Xak Tsaroth. The second was less useful as the first half was very plot railroady (get the PCs captured, rescued by elves then sent to Pax Tharkas to rescue everyone), but the second half has the fortress of Pax Tharkas and the Sla Mori tomb under it, which is useful to me.

There are 11 more modules in the main storyline, plus two supplemental ones, stuff I may need to look for in DLA, box sets, etc.

Now, I don't need to do all of this at once, of course, but I'll need to get my hands on a 5E Monster Manual (only have the PHB in hard copy ATM) and see how easy it will be to switch out monsters from 1E Dragonlance to 5E (and how hard to convert those that aren't in 5E).

Anyway, it's doable. I just need to find some time to get Chanbara finished first (and hope Gamer ADD doesn't get me off on some other tangent in the meantime!).