It's been quite a few months since I last worked on Chanbara. I've got a bit of work-imposed isolation, so today instead of just frittering the day away, I started revising and simplifying things for the game.

For those new to the blog or with short attention spans, my aim is to make Chanbara the OSR game where Akira Kurosawa movies meet Ghostbusters. PCs are samurai, ninja, etc. in a fantasy equivalent of Japan (set in the same world as Flying Swordsmen) tasked with beating back the hordes off supernatural threats that plague the land, and bringing back treasure for the greater glory of lord, clan, temple, etc. 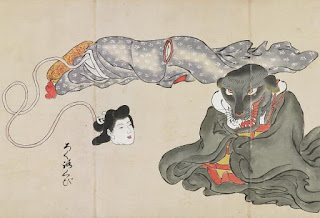 I've waffled over the past, what, three years or so? Should I have a small number of classes with profiles for customization, like in Flying Swordsmen? Or a bunch of distinct classes like in AD&D/3E/5E? Non-human races or not? Things like that.

The current goal is to be as simple and concise as possible. To that end, I've decided to leave out non-humans (I can add them in an expansion later), and only have three classes, each with three or four profiles for specialization. Also, I had an idea for backgrounds that provide some skills, starting gold/equipment, and guidelines for Allegiances (like in d20 Modern, instead of alignment). The idea is very similar to what showed up in 5E, and while I did have the idea before the Next Playtest stuff was released (pretty sure I've still got some files to prove it...), I've gone ahead and taken some other inspiration from 5E for this game. It's still going to be OSR. You could easily use Chanbara characters in a FLAILSNAILS game, although like Flying Swordsmen they'll possibly be a bit higher powered than your average BX/BECMI or AD&D character.

After working up some general notes/guidelines to follow for this revision, I wrote up the Bushi [Warrior] class. Of course, this is still subject to change, but here's a taste:


Kensei: Kensei [Weapon Master] are warriors who devote themselves to mastery of a single weapon. Some are simply dedicated martial artists, others are wandering duelists, and some are elite soldiers. Their prime ability is Dex. They may select Buke, Noumin or Chonin background, and gain the Craft: Weaponry skill for free. They may select any two other skills from their background of choice. Kensei are proficient with basic and samurai weapons (plus their weapon of choice, if it is a ninja or classical weapon), but are not proficient with any armor.
Kensei Special Abilities
1st level: Weapon of Choice – The kensei gains a +1 bonus to hit and +2 to damage when using their weapon of choice. They do not need to spend any combat dice to gain this bonus.
3rd level: select either Fighting Stance or Iaijutsu.
Fighting Stance – By spending one combat die, the kensei gains a bonus to AC and TD equal to the result of the die +1 per two levels (rounded up) for one minute (10 rounds).
Iaijutsu – At the beginning of combat, the kense can roll a combat die, which is added to initiative for the remainder of the combat. Also, the bonus is added to their initial attack. If this attack hits, damage is doubled.
6th level: select either Counterstrike or One with the Weapon.
Counterstrike – When the kensei is struck by an opponent, they may spend one combat die and make a free attack back on their opponent, with the die result added to hit and damage. If the kensei already acted this round and used a combat die, they may still use this ability but may NOT use a combat die in the following round.
One with the Weapon – Whenever a natural 20 is rolled to hit with their weapon of choice, or by spending one combat die, the attack deals normal damage and counts as a tactical attack. The kensei may choose to trip, disarm, push, or any other tactical effect on top of the damage.
9th level: select either Blade Tempest or Master of Forms.
Blade Tempest – By spending one combat die, the kensei can make one melee attack per target within the reach of their weapon, or a number of ranged attacks equal to the result of the combat die plus their Dex modifier (for firearms, they must have one firearm prepared for each attack). Roll to hit and damage normally against each target, no more than one attack per target allowed.
Master of Forms – By spending a combat die, all damage dealt by the kensei's weapon of choice is maximized for one minute (10 rounds). Bonus damage from subsequent combat dice are not maximized, only the base weapon damage.


Samurai: Samurai [Warrior Aristocrat] are typically high-class warriors who devote their lives to the service of a master, although ronin who serve no master are also members of this profile. They are the most common type of Bushi in the Jade Islands. Their prime ability is Str. Samurai may select Kuge, Buke or Noumin (if recently raised to samurai status through meritorious service) backgrounds. They gain the horsemanship skill and either letters or warfare skills for free, and may select any two other skills from their background of choice. Samurai are proficient with basic, samurai and classical weapons, and all forms of armor.
Samurai Special Abilities
1st level: Stalwart – all combat dice are d8 instead of d6.
3rd level: select either Defender or Kiai Shout.
Defender – When rolling a standard combat die, add that value to AC and TD for the round in addition to the normal bonus to hit and damage.
Kiai Shout – When rolling a standard combat die, heal a number of hit point of damage equal to the result in addition to the normal bonus to hit and damage.
6th level: select either Fearsome Reputation or Power Strike.
Fearsome Reputation – Gain a bonus to AC, TD and saving throws equal to 1/2 level, rounded up, when fighting an opponent who knows your identity. This ability does not require spending any combat dice.
Power Strike – Whenever a natural 20 is rolled, or by spending one combat die, base damage from the attack is tripled in addition to the combat die's bonus damage if one is used.
9th level: select either Deflection or Greater Kiai.
Deflection – By spending a combat die, the samurai gains a bonus to AC and TD equal to the die result, and also may make a save vs. metal to negate any attack that strikes the samurai that round.
Greater Kiai – When rolling a standard combat die, gain double the bonus rolled to attack and damage, and also force all opponents of 4HD or less to save vs. earth or flee in terror for 1d6 minutes.


Sohei: Sohei [Warrior Monk] are monks who practice combat to defend their temples, monasteries, convents and shrines. Some are instead samurai who have take some holy orders but serve in a lay position in the religion. Their prime ability is Wis. Sohei may select either the Buke or Shukyo background. They gain the Religion skill for free, and may select any two other skills from their background of choice. They are proficient with basic, samurai and classical weapons, and with all types of armor.
Sohei Special Abilities
1st level: Frenzied Attack – By spending a combat die, the sohei may make one additional attack equal to the result of the combat die, but all attacks that round take a penalty to hit equal to the combat die result instead of a bonus. They gain no bonus or penalty to damage.
3rd level: select either Piety or Tenacity.
Piety – Spend one combat die to cast a 1st level Soryo spell.
Tenacity – By spending one combat die, the sohei can prevent a number of opponents equal to the result of the die from closing to melee, disengaging in melee, or moving past the sohei for that round. The sohei also gains a bonus to AC and TD equal to the die result for 1 minute (10 rounds).
6th level: select either Immunity or Wide Swing.
Immunity – By spending one combat die, the sohei becomes immune to one type of magical attack (from a creature) or one type of spell (yin, yang, elemental type) for 10 minutes.
Wide Swing – Whenever a natural 20 is rolled, or by spending one combat die, the sohei can make an additional attack against an opponent adjacent to the one just attacked.
9th level: select either Iron Body or Unstoppable.
Iron Body – The sohei takes 1/2 damage from one type of weapon damage. Select blunt, slashing or piercing. This ability does not require spending any combat dice.
Unstoppable – When using a basic combat die, all rolls that round for the combat die, to hit, damage, and even saving throws may be rolled twice, and the better result taken.