Just cogitating on some things in the news besides Obama's victory (qualified yea!) [That's about as political as I'm gonna get here, don't worry.]

Disney bought up Marvel a while back, but pretty much have left Marvel to do their own thing.

Disney repurchased Pixar, but pretty much leave them to do their own thing.

Disney has just purchased ILM, including Star Wars.  After thinking about this, I say good!  At worst, anything they turn out won't be any worse than something Lucas might have done were he inclined to do so.  And thinking about the general quality of the Pirates of the Caribbean movies (first and fourth were good, middle two were decent enough) and the John Carter movie (movie was fine, Disney just stuffed it up on marketing and accounting), they'll likely do a good job with any future Star Wars movies.

And getting things away from the Skywalker story would be a good thing, IMO.  We don't need movies about Leia and Han's kids or old Jedi Master Luke, there are novels that already cover those if you care to read them.  Give us some awesome new stories in awesome new parts of the Star Wars Galaxy, please! 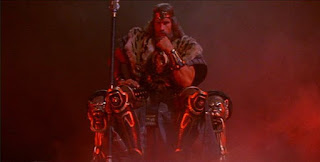 Arnold Schwarzenegger is returning as Conan!  King Conan of Aquilonia!  Awesome!  Looking forward to this, even if they don't use one of Howard's original tales (although the Scarlet Citadel or Hour of the Dragon would both make good movies, IMO).  I'm cool with letting original Conan be Original Conan, the comics Conan and the movie Conan being alternate universe things, like how the comic book, old Fox cartoon, and movie X-Men are similar but not the same.

And now Disney is thinking of picking up Hasbro, and WotC.  Well, at least I guess we know who will be making any future Star Wars CCGs and RPGs if this goes through.  Again, if Disney takes a fairly lax hand with WotC the way they have with Marvel and Pixar, this could be good.  If the Mouse House tries to micromanage the gaming business, well, at least we've got the OSR.

Plus, a Bargle movie, or something in the Star Frontiers or Gamma World universes would be cool.  You know Disney will be in charge of future D&D movies, maybe we'll get one that doesn't suck!