Beast of the Week: Trogdor

Trogdor was a man. Then, he was a dragon-man.  Maybe he was just a dragon?  But he was still Trogdor!!! 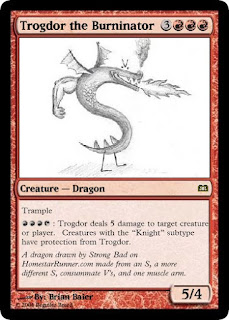 Yes, everyone's favorite Strong Bad email from Homestar Runner serves as this week's beast.  Can't wait to unleash some trogdors in my megadungeon!

Trogdors are dragon-kin with long, serpentine bodies, stubby wings that allow for slow flight, and a single muscular humanoid arm.  Trogdors attack with a weapon (doing +3 damage due to their great strength) and a bite.  They can also use a fiery breath weapon at will.  The breath is a cone 60' long and 20' wide at the far end.  All in the cone take 4d6 damage, but may Save vs. Dragon Breath for half damage.  Trogdors love nothing more than burninating every peasant and village they come across.  There are rumors that some trogdors can shape-shift into human and half-dragon humanoid forms, but this has never been confirmed.