Beast of the Week: Golgothan

I've got a little pocket notebook that I carry around with me (usually in my backpack, rather than my pocket, but sometimes it makes its way there as well).  I use it to jot down mostly gaming ideas I have while I'm commuting or at work, but it's also handy for keeping information about my various private lessons sorted out.  Way back in the spring, I think, I made a list in this notebook of creatures I thought I would write up for this Beast of the Week series (nearing completion!).  After using a few of them, I mostly would find other inspirations to use during my week, so it became sort of the fall-back option.  If I had no other ideas, I'd write up one of the creatures from that notebook page.

Anyway, this week the inspiration was tied to one of the creatures on that page - the Golgothan excremental, or shit demon, from Kevin Smith's movie Dogma.  After last week's Vaults of Ur game involving a strong fear of a poop monster, I think it's time to unleash this critter on the fifty or so people actually still reading this blog. 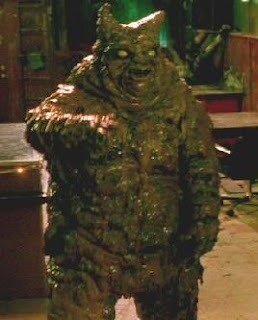 Golgothans, or excrementals, are demons created out of human feces culled from places of execution or slaughter.  They stand roughly as high as a man, and have a humanoid form, but their body is a slimy mass of dripping dung.  Those within 30' of an excremental must Save vs. Poison or be unable to act for 1d4+1 Rounds due to the strong stench emanating from the demon.  Even those that save suffer a -2 to hit while within the noxious cloud.  In combat, golgothans can make two slam attacks, or fire off a blob of their own substance up to 60' away as a ranged attack.  Anyone struck by a golgothan or one of its fecal blasts becomes coated with crap, and must Save vs. Paralysis or be slowed (as the spell) until the dreck is washed away or dries (in about one hour).  Once per day, golgothans may use any toilet, latrine, chamber pot or dung heap as a dimension door, appearing out of a similar location within 1 mile.