Instead of doing the work I needed to do on my grad school final project (procrastination - I can do it tomorrow...), I was messing around with OpenOffice's version of PowerPoint, with some touchups in GIMP, and mocked up a cover for Flying Swordsmen. 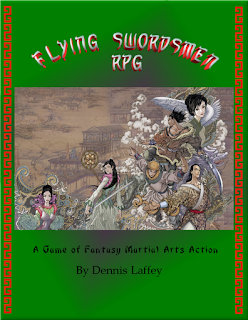 Still needs some work, and I need a version of the picture without the DeviantArt watermark.  Waiting to hear from Daxiong about that.

Anyway, opinions wanted.  And don't hold back if you don't like it.  I can take criticism and it could save me from releasing a game with a crappy cover.  :D

Edit: Lee reminded me that I had meant to use the Chinese characters in the cover somewhere.  I posted them in the comments, but they're small.  Here they are bigger: