This afternoon, Josh, Pat and I got together to play some more Gamma World.  Jeremy and Adam had to work, and Adam seems to be no longer interested in the game due to the long gap in play.  Anyway, you can read about our previous exploits here.

We quickly ret-conned the ending to the last session.  It was Wing Lao, my Altered Human Examiner, and John Smith XXXIV, Pat's PSH Examiner, who showed up in the balloon.  Tom Petty was ret-conned to have died along with Saeng the Minotaur in the blast (read the previous post for details on that hilarious episode!).  Wing and John joined Jar-Jar-Jar, Pat's Altered Plant Scout, and Linka, my Mutant Cougar Esper.

Well, we found out we couldn't get into the Mind Keep from the roof, where we were, so we climbed down the side of the tower to a plateau below.  We tried to get in a door, but there were motion sensors all around and a live-metal guard (security bot) sent us on our way since our keycard got vaporized with one of the two above fatalities.

We explored a hangar and found a wrecked aircar with a full tank of fuel and a few other goodies, after defeating a flying Grey Ooze type creature.  There were some stone huts out back, which we next explored.  The first had some kind of growling animals, so we left it alone.  A few were empty, one collapsed as soon as we touched it, and another was home to a pair of Jaggets, mutant cheetahs.  The female was home, and scared, and lashed out with a mental blast at my cougar, Linka.  It missed, so Linka fired back with her own mental blast, hurting the Jagget.  Someone else (forget exactly who) also attacked successfully, and she died.  Just then, her pissed husband attacked from behind, but he went down quickly as well.  We searched around, and found some goodies, including a generator buried in the dirt, another key-card, and some various random goodies, including car keys.

Our weather indicator told us bad weather was approaching, so we took shelter in the hangar while it rained torrentially for a week.  Then we got a blizzard for anther week, but this time we sheltered in one of the stone huts to conserve fuel.  We were now officially low on food.  We found another small building that was full of boxes to the south, but it was also home to some weird humanoid mutants with rock-covered skin and lots of hit points.  We had a long fight with them, but Wing's Confusion ability and Linka's mental blasts worked well on them, as they had high AC but low Mental Defense.  Jar-Jar-Jar was severely wounded, down to only 1 hit point by the time we finished them off!  Inside the building, though, we found an intact ground car!  Keys fit the ignition, and we could transfer the generator and fuel from the hangar to get it working again.

Well, now we tried the door to the Mind Keep again.  The security bot accepted John Smith's key-card, and ignored Jar-jar-jar, so those two went inside.  Linka and Wing had to figure something else out.  Inside, the two J's fought another of the flying blob things, and discovered a strange crystal cone creature that ignored them completely.  And they found out that the elevator wasn't working.  Meanwhile, outside, Wing circled the tower and investigated another of the sensors, this one wasn't on.  They were pretty flimsy, so we thought we'd try to destroy the one by the door to keep the robot from appearing.  We fired on it with our muskets, with Linka's shot hitting and destroying the sensor.  Then we waltzed in unopposed and met up with the other two.

While searching that floor, we found more loot, including another security card and a chemex grenade.  We also opened a door to a room full of black mushrooms that began spreading exponentially when exposed to new air.  One chemex grenade later and the mushrooms were no more (Josh letting us know that was a very good thing!).  We still couldn't find a way to get the elevators activated, so we pried open the doors and used the ladder to descend into the basement. 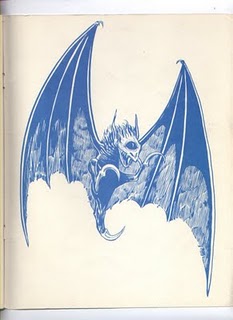 Well, in the bottom floor, the first room we explored was home to three Obbs.  Yikes!  One super-radiation blast from them finished off poor Jar-jar-jar (he'd had so many close calls, and finally met his match).  Wing and John were incapacitated by the radiation.  Linka was merely weakened, so she grabbed up Wing and John and ran out of the room.  She waited until the Obbs quieted down, then quickly opened the door and used telekinesis to get Jar-jar-jar out (luckily Obbs are carnivores, and didn't want to eat a cactus mutant).

Linka got everyone into the balloon outside and with our NPC scout companion (who did nothing but hang around away from danger and offer occasional advice) we floated back to our starting base to heal and regroup.

We decided that was a good place to stop, and spent the rest of our session time just talking and Pat rolled up a new character.  We needed a new Enforcer, so he choose a Mutant Rhino.  But then he rolled poorly for Str, and also got a Size Reduction mutation which upped his poor Dex (but not enough to give a bonus) and reduced his Str even farther!  He also got a Gas Generation mutation (hallucinogenic!), which of course Josh and I insisted to Pat must be a flatulence attack.  Add in a dual brain (Josh again said it must be located in his ass), and telepathy, heightened Intelligence, and I don't remember what, and we've got a fun new character to join the expedition for what will likely be the final session in a week and a half!

[Jeremy, if you read this, don't worry, your new character can rejoin us easily next session.  If Adam decides to come, that's fine, but Josh had Pat erase the Tom Petty character sheet for Pat to make his new one though...  Hope Adam doesn't mind!]

[Barking Alien, if you're reading this, this session I'd say qualifies for 'super-fun.'  We had a blast.]