You got kung fu chocolate in my sword & sorcery peanut butter!

Yeah, age (and nationality) test in the post title. Plenty of my readers are old enough (and American enough) to get the reference, but maybe not all.

So I continue to tool around with my TSR compilation rules. After chatting with JB in the previous post's comments, I took a look at the 1E Monk class, and Gary's description, which basically said it's a non-spellcasting cleric with thief skills. And in typical AD&D fashion, it's way more complicated than it needs to be. 5 attacks every 4 rounds? Seriously? Fighters getting 2 every 3 rounds with weapon specialization (or being 7th level without it) is ridiculous enough. And of course there is the mixed bag of special abilities. 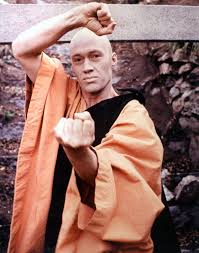 I hadn't read through that version of the Monk in a long time. I played one in my cousin's campaign back in our high school days, and when I ran an OA game after college, one of my players was a Monk. But it had been a while. And my ideas about Monks were really colored by what they are in 3E/Pathfinder and 5E. In those editions, they're basically variant Fighters with some skills that let them be a little like a thief. Of course, the Rogue in WotC editions is also really just a variant Fighter with more out of combat utility, so there's that.

Anyway, to get to the point, today I decided to return the Monk to the Cleric/Thief slot in my symmetrical class construction system. Instead of the really odd archetype of the Half-Orc who can pick your pocket after he heals you, and unlock a trap after turning some undead (I mean, I love this, it's so random that half-orcs can do this in AD&D), the Monk is maybe the better fit, and more organic (by that I mean what the players will expect a version of D&D to have).

I even wrote up a very simplified version of the class that I'm pretty happy with. Acrobat is already one of the Thief subclasses I've written up, so it uses the Thief-Acrobat skill tables (each Thief subclass gets slightly different skills and slightly different % numbers). I'd also already given the Acrobat unarmed fighting ability and AC bonuses despite not wearing armor (my previous version of TSR had combined the UA Thief-Acrobat and the 3E/5E Monk concepts), so it was a more natural fit than a standard Thief. None of my Cleric subclasses really fit, though, so following 1E and the RC (and later editions to an extent), I made a Monk class that is a lot simpler. It doesn't cast Vancian spells, and most of its magical/mystical abilities are self only (I did give them "lay on hands" healing instead of self healing, but that may change).

They are the only non-Fighter class to get multiple attacks, but that can only be done with unarmed fighting, not with weapons. And they only get 2 per round, while high level Fighters get 3. Hopefully they will do alright in a fight, but not overpower the Fighter.

Oh, and my Darkstalker concept (Van Helsing/Belmont family style vampire/monster hunter) will become a Cleric subclass, the way it probably should have from the beginning.