Random Star Wars theory hit me the other day.

The Sith was a species that died out (or was wiped out - not up on my early Galactic History) but were Dark Side Force users. They inspired the other Dark Siders to call themselves Sith.

Mandalorians were a species that were wiped out but inspired a culture that other species pick up and follow, also called Mandalorians.

Yoda, Yaddle, and the Child are a species of naturally Force sensitive creatures of unknown name.

Are they (their hidden species name) the Jedi? Did the race of natural (Light Side) users inspire the Jedi culture the way the Sith and Mandalorian species did? Only they were not quite wiped out, just very rare and long lived?

Something to think about. 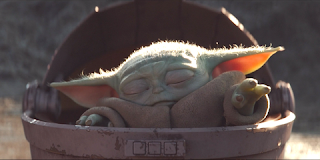 Labels: other stuff, Star Wars, these are not the droids you are looking for