Ruined Keep on the Borderlands

I've had this idea in my head for a while now. I'm always looking through old modules for things to appropriate into my West Marches campaign. And the Caves of Chaos are one of the most popular so far. But looking through the module, and thinking of other blogs that have suggested there's more treasure to be had by sacking the Keep itself than in all of the Caves, why not use the map and key of the Keep as a dungeon in my West Marches?

Fairly simple idea. I can keep the map and most of the keyed entries' descriptions...just make them all run down and such. I can even keep the treasure distribution as it is. All I need to do is substitute monsters instead of the keep's normal inhabitants. 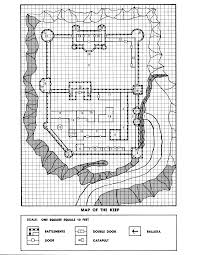 The layout of the keep is already sort of dungeon-y. The outer bailey has rooms and passages basically. And you need to penetrate the security systems of the keep (or bypass them with clever planning) to get to the good treasures in the inner bailey.

Now I just need to think of where to put it in the West Marches map, and what sorts of monsters I want to populate it with.