How big is Zhongyang Dalu?

In my last post, poster Reason asked for an estimate of scale. And well, it's a big continent.

I never set an exact scale to it, but I did set a scale to the Yu Archipelago/Jade Islands. Here's that hex map, and the Flying Swordsman map of Zhongyang Dalu again for comparison. 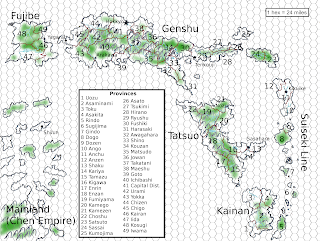 Here are the Jade Islands, the portion of the setting I use for Chanbara. The hexes are 24 miles, which puts the map at about 1200 miles east to west, 800 miles north to south. And the Jade Islands are shorter lengthwise (from Uozu and Rindo Provinces in the south-east to Iida and Kosugi Provinces in the north-west) than actual Japan. I haven't tried to calculate land volume, but considering there's no massive main island like Honshu, and none of the smaller islands rival Hokkaido for size, it's a fair bit smaller. 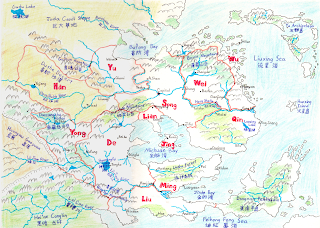 Here again is the Zhongyang Dalu map from Flying Swordsmen. You'll see the Yu Archipelago (as the mainlanders in Flying Swordsmen call it) is the Jade Islands (as the natives of Chanbara call it...actually the same thing, since "yu" means "jade"). It's the northeast ninth of the map. Which puts the Zhongyang Dalu map at around 2400 miles north to south and 3600 miles east to west.

Pretty massive. And yet, actually a fair bit smaller than real world China. The Chen Empire (all the provinces in the red borders) has a more widely spread population than China, though, as much more of it makes for good agricultural land.

Posted by Dennis Laffey at 8:37 PM