Of Vampires and Energy Draining

I've been watching some vampire-themed movies lately (The Lost Boys and Salem's Lot in particular).  So I've got vamps on the brain.  Which of course leads me to think of energy draining. 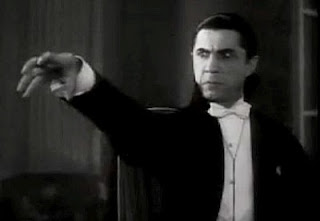 Well, I was thinking about the vampire's attack.  In the literature, vampires tend to suck blood from sleeping or charmed and therefor "willing" victims.  When Van Helsing and Harker come after Drac, he doesn't try to "suck your blood" [please read that in a cheesy Bela Lugosi accent].  Nothing in the D&D write-up of the vampire prevents them from feeding on blood.  But when adventurers attack, no vampire is gonna try and sink their teeth through steel gorgets, and even if they managed that, they wouldn't be able to suck enough blood to cause much damage before they get pummeled with magical weapons and such.

No, vampires save blood sucking for feeding.  When they're in danger, they use a much more insidious attack, the energy drain.

And of course, we're always tinkering with energy drain, aren't we?  I had been thinking to modify it so that instead of losing levels, a PC just lost the XP.  They would still function as whatever level they were before the attack, they'd just need to earn a lot more XP to get up to the next level.  So, for example, a 5th level Fighter hit by a wight or wraith's energy drain attack would drop down to 12,000 XP (halfway between 4th and 5th), and if hit by a specter or vampire's double energy drain would drop to 6,000 XP (halfway between 3rd and 4th), but in either case would still function as a 5th level Fighter until earning 32,000 XP and making 6th level.

This would save lots of book-keeping.  No need to refigure hit points, attack values, saving throws, spells, Thief skills or undead Turning.

Another idea I just had this morning would be the opposite.  The PC effectively drops down to whatever level the energy drain attack would drop them to, but the PC keeps their current XP total.  As soon as they make enough XP to gain whatever the next level would be, they get all lost levels back and gain the new level as well.  So, our 5th level Fighter above would function as a 4th level Fighter after a wight/wraith drain, or as a 3rd level Fighter after a specter/vampire drain, as normal.  But would keep his, let's say, 20,850 XP.  When the Fighter earns 32,000 XP, he would become a 6th level Fighter.

I'm not sure which I like better.  Both have their advantages and disadvantages.