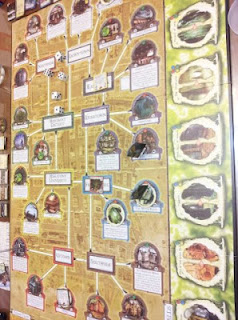 Yesterday afternoon, the old board game group minus Steve (me, Pat, Josh, and Alex) got together to play the board game Arkham Horror.  The premise of this cooperative game is that one of the Great Old Ones is about to awaken.  Monster spawning gates to other worlds are opening around Arkham, Mass (circa 1927).  Investigators have to stop the monsters, explore the other worlds, and then shut the gates before the Old One awakens.  If it does awaken, the investigators then need to fight hard to stop it.

It's a pretty fun game.  The basic turn order rules were fairly simple, but there's a LOT of minutia to deal with, and lots of little things to remember.  We definitely made a few mistakes early on, and I'm not 100% certain we were playing everything correctly even at the end.  If you're into modern board games, this is definitely an "Ameritrash" game, not a "Euro" game.

In our game yesterday, we were facing the awakening of Shub-Niggurath, the Black Goat of the Woods.  Its powers were that Dark Young (one of the tougher monsters) became "endless" meaning that when killed, they return to the monster cup for recycling, rather than being kept as tokens to be spent.  The other power was that all monsters' Toughness (hit points) increased by one.  So monsters were fairly tough in the game we played, but that didn't stop us from killing lots of them and generally keeping the monster population under control while we explored and closed/sealed the gates.  (Yes, we ended up winning before old Shubby was too close to awakening.)

We had a bit of good luck with our character draws, in that we had some nice complementary characters.  Alex, in particular, had a great character ability which let him declare a reroll of missed dice (keep successes you've already rolled) once per turn.  That really helped a lot, especially with the combat rolls.  My character, the dilettante, got $1 automatically each turn, which allowed me to buy plenty of unique items, scoring two of the Elder Seal cards during the game (Josh also got one of them), which allow for automatic gate sealing.  Six gates sealed is a win condition.

One thing that hampered us later in the game was that the Mythos Card drawn at the end of each turn shows where a gate will open.  But we had a long run of either places where we had already placed a seal or else where a gate was already open, which causes a "monster surge" where lots of monsters appear at once.  Several stationary monsters had collected at one of the gates, and even our best monster hunter Alex (who had lots of good spells and items and that reroll ability) wasn't sure he could take them down.  In the end, though, a few more gates opened at other locations, and we quickly explored them and shut them, winning the game.

I'd definitely like to try this game again.  The fact that you draw a random Great Old One, and random investigators (although some people of course select them) means it's a game that should have a high replay value.  And even though we beat the game on our first time playing it (well, except for Pat who has played it a few times before), I don't think we would be certain of beating it again in the future.

So if you like complex, long board games with lots of randomness (aka Ameritrash), and are a fan of HPL and the Mythos, definitely give this game a try.

Posted by Dennis Laffey at 7:42 PM

Labels: Board Game Group, board games, Lovecraft, other stuff