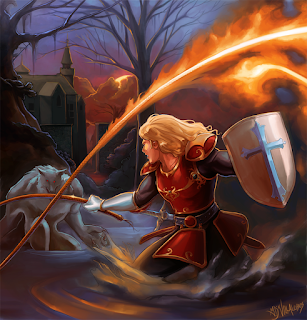 Castlevania games have long been among my favorites. I still regularly replay the old NES games via emulation. And I enjoyed the hell out of the Playstation/PS2 era games, especially (no surprise) Symphony of the Night.

When I was a teenager, and finally got around to mapping out the Haunted Keep in Karameikos (I had Mentzer, not Cook's Expert Set), of course it was pretty heavily inspired by the original Castlevania game.

Back when I was still using 3E, I took a break from developing the campaign that would eventually provide the setting for Flying Swordsmen (and my Chanbara play tests), I tried to make a Castlevania inspired megadungeon. But like SotN, I had limited paths from zone to zone, and strict challenge levels, and whatnot, and it got to be too much of a burden.

While I don't really have time to try and create a megadungeon at the moment, the approach of Halloween has got me thinking about it again. IF I were to create it now, with more years of experience and evolved ideas on what makes for a good game, the plan would be a lot more open. If low level PCs wanted to head straight to the Clock Tower and Dracula's Turret, they'd be able to do it. Not likely a good idea, but the option would be there.

And like in Castlevania 2: Simon's Quest, there would be some towns and other smaller dungeons around besides just the castle proper. They would allow the players chances to learn about the zones of the castle (and the threats likely to be encountered there), and also places to buy/sell/trade loot and magic items, and "side quests" to find weapons and artifacts useful against the denizens of Castlevania.

And of course, I'd need to decide if this would be done in Classic D&D, or with RetroPhaze (which I apparently have an older edition of, John keeps working on this great little game!).