Part of my readings on game design have got me thinking about other old school games besides D&D that could be used for designing old school games. Yes, this topic has been around in the OSR for pretty much as long as the OSR has been around. And D&D is the biggest name in table top roleplaying. Yet it's still interesting to revisit the topic from time to time (at least for me).

The actual impetus for this blog post was a bit of inspiration I had just yesterday. A while back, JB of BX Blackrazor asked me why Chanbara was a Japanese-themed game when I live in Korea. Of course, the answer is that I lived in Japan for 10 long years (I've lived in Korea for a little over 10 years now, so I've been here longer) before I lived in Korea, and speak the language better, so I have a better grasp of Japanese fantasy. (By the way, I should probably be plugging Chanbara more...you can get it in PDF for $10, print or print/pdf combo for $20, right here!)

The fact is, I wasn't really sure what a Korean OSR game should be about. And not in the indie game sense of "about" but in the Kevin Crawford sense of "what are the verbs?" (A.K.A. what do the players do in the game?). Because honestly, with a bit of palette swapping, either Flying Swordsmen or Chanbara would work well for a Korean-themed dungeon crawl/hex crawl D&D style game. The weapons are similar. The magic system is similar. The themes in the source literature are similar.

If I really want to get a game that's somehow essentially Korean, what the game is about needs to be a bit different. And then my eureka moment started to hit me two days ago and finalized yesterday. We had gone up to Seoul to take care of some business at the U.S. embassy. We brought the boys and stayed the night, and did a bit of sightseeing. One place we went was the Korean Folklore Museum. At a display of civil and military officials' garb and gear, the idea started fermenting. On the KTX back to Busan yesterday, the idea hit me in full. And it's related to ideas that have been in my head for a while now about using other games besides TSR era D&D as a basis of old school design.

Still with me? I hope so. I think my thought process leading up to this is important to the design. Anyway, I realized that a game where civil officials are an important part of the game shouldn't be one where the primary goal is killing monsters and taking their stuff. The game should be about (and XP awarded for) solving a variety of social/economic/military problems [which, from time to time, may include supernatural/monster problems]. People are going to be the main adversaries, and combat should not be a prioritized means of solving conflicts in the game. Basically, a class/level system like D&D, with XP awarded for combat and treasure acquisition, doesn't cut it.

But a system like Star Frontiers, which is classless and skill-based, with an XP system based on how well missions are accomplished rather than the exact amount of foes defeated/wealth gained is perfect for this. 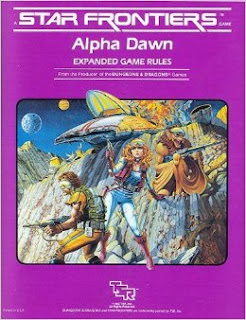 If you've never played it, Star Frontiers is a d% based game. Characters get eight stats (arranged in four related pairs) that can range from 1 to 100, and that's your percent chance to accomplish something based purely off of those stats. That includes saving throws, which get keyed either to your Stamina (which are also hit points...and saves are usually at current STA rather than total, so it's harder to stave off poison or disease or knock-out gas if you're wounded) or Reaction Speed (it's all in the reflexes). In addition to ability checks, there is a skill system where you either get a set base percent chance plus 10% per level in the skill, sometimes lowered by 10% of the level of the opposition, or 1/2 a related ability score plus 10% per level of the skill (again, sometimes minus other factors).

Each skill is actually a group of related subskills, each with their own different base percentage of success. So a PC with Computers has a chance to bypass a computer's security. The base chance is 30% +10% per skill level -10% per computer level. So with Computers level 1, bypassing a level 1 computer has a 30% chance, and a level 2 computer is only a 20% chance. At skill level 6 (the maximum), the PC has an 80% chance to bypass a level 1 computer's security, and so on.

For combat, melee is 1/2 of Strength +10% per level of Melee weapons. For ranged combat, the skills were divided into type (beam weapons, projectile weapons, etc.) and the chance to hit was 1/2 of Dexterity +10% per level of the appropriate ranged weapon type. Armor absorbs damage rather than reducing chances to hit.

XP awards are small (1 to 5 per session, usually) and XP was spent to increase skill levels and to raise ability scores (and some of the alien races had % based racial abilities that could also be improved by spending XP).

So for my potential future Korean fantasy OSR game, I shouldn't try to do yet another version of medieval Asian D&D. I should do medieval Asian Star Frontiers. All I need to do is set up the skill system to reflect what Joseon (or Goryeo if we want to go farther back in time, or Silla/Paekchae/Goguryeo/Gaya if we want to go even further still) officials and citizens were doing. Then set a system of XP awards for doing what you should be doing well.

Related to this idea (of using other, non-D&D, games for OSR designs), I'd been thinking recently that for an OSR supers game (yes, I know MARVEL FASERIP is available free online and does it well) that Gamma World would be an interesting base game to use. I'm most familiar with the 4th edition of the game [1992, not the 4E D&D one], but any older edition might work. 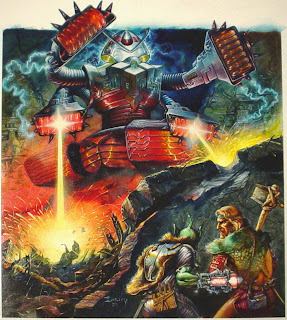 Gamma World's mutations are basically a list of superpowers and some super weaknesses. And the artifacts are high tech play-toys. Create a system for Batman/Iron Man/Green Arrow/Black Widow style (pure-strain) humans to roll or purchase high tech items, while altered/mutant/alien characters roll some powers (and maybe get some tech too) and you've got a supers generation system. It just needs a few tweaks to change it from a game about scouring post-apocalypse ruins for artifacts to a game about stopping super-villains.

GW more or less uses a D&D design (except for 3rd edition, which uses FASERIP...as does Star Frontiers' Zebulon's guide), but it's got some differences. And I might want to think about FASERIP now that I think about it, as well as WEG's d6 system (the old Star Wars game) which is now open game content.

So, it may be time, for me at least, to take a break from the D&D-based OSR design scheme, and try out a few ideas for other games based on other designs.

Posted by Dennis Laffey at 5:00 PM