In my post the other day, I got some good feedback from people. I'd just like to make a clarification before moving on to the first of Juul's six elements that he considers necessary and sufficient to label something as a game.

This is just a theory that I found interesting. It's 15 years old, and Juul may have gone on to modify or clarify it (I haven't checked). I did find his Masters thesis online, which argued that narrative and game were incompatible, with a note from him that he's changed his stance on the issue since then.

I'm not posting Juul's theory as some sort of definitive matter on the subject of what is and isn't a game. I'm just throwing this out there as a potential framework upon which an actual workable theory of RPGs could be based, since they share all of the listed elements to a greater or lesser degree (yes, even the one I'm discussing today, which was the big point of contention in my previous post). Feel free to disagree with the theory. I may play devil's advocate here defending it, since I'm presenting it, but I don't have any stake in Juul's theory. If it doesn't stand up to criticism, then it's not a very good theory and we can look for something better.

So, once again Juul's six elements and my brief definitions of each:

Juul (2003) argues that a game must meet these qualifications:
1. Fixed Rules [players don't need to debate rules during play]
2. Variable and Quantifiable Outcomes [there are specific goals or end points, and they are not the same in all instances of the game]
3. Valorization of the Outcome [some outcomes are better than others]
4. Player Effort [the player must act to overcome the challenge, not just rely wholly on random chance]
5. Attachment of the Player to the Outcome [players are invested in achieving certain outcomes or avoiding certain other outcomes]
6. Negotiable Consequences [while most games can be and are played with no real world consequences, it's possible to bet on, play professionally, or in some other way attach real-world stakes to instances of play]


Fixed Rules
This was a point of contention in the previous post not so much for what Juul actually says on the point (which I didn't go into detail there, that's what this post is for). It was that this was the one element Juul noted that table top RPGs violate, for which he labels them as a 'borderline' game. Note here his terminology. He's not saying TTRPGs aren't games, he's putting them on the border - hedging his bet. In other words he just made a theory saying games must have these six things, but here are a class of activities that are sorta soft on one of the main elements but are recognized broadly as games. So he notes them as more of an exception that proves (in the sense of tests) the rule along with a few other borderline cases.

Here's what Juul has to say himself:


1. Fixed rules
Games have rules. The rules of games have to be sufficiently well defined that they can either be programmed on a computer or sufficiently well defined that you do not have to argue about them every time you play. In fact, the playing of a non-electronic game is an activity that in itself involves trying to remove any unclearness in the game rules: If there is disagreement about the rules of the game, the game is stopped until the disagreement has been solved. In a commercial game, the developer will (hopefully) have made sure that the rules are unambiguous, but what about non-commercial games? A non-electronic and "folk" (i.e. non-commercial) game tends to drift towards becoming unambiguous, not in the sense that they don't require ingenuity to play, but in the sense that it doesn't require ingenuity to uphold the rules. This explains some of the affinity between games and computers - and the fact that a several thousand year old non-electronic game is easily implementable in a computer program: The drive towards unambiguity in games makes them ripe for implementation in a programming language. To borrow some concepts from computer science, the rules of any given game can be compared to a piece of software that then needs hardware to actually be played. In games, the hardware can be a computer, mechanical contraptions, the laws of physics, or even the human brain. (p. 5-6)

Juul develops his six elements of his definition of 'game' from seven previous definitions, and all seven included some sort of phrasing about rules and/or procedures. The rules should be unambiguous. Over time, rules for games tend to lose any ambiguity they may have once had.

Notice, he doesn't say arguments over the rules can't happen, he says they don't happen "every time you play." And the more established a game is, or the more carefully developed (for commercial games), the fewer ambiguities the rules are likely to have.

He also doesn't say the game can't have a referee. At the end there, he notes the "hardware" needed to implement a game includes the human brain. A referee can judge whether or not a rule has been followed or broken, but does not (ideally) modify the rules during play.

What he is saying is that a game has (or at least should have) rules that are clear and well understood by all players. Any rule that is not well understood by all players will be modified over time to become clear. Because of this, computers make a great medium on which to program and play games. It's the ultimate impartial referee. It also helps explain one appeal of many Euro-style board games, with their clear and simple rules that make them easy to start playing.

Here's his chart of various games, pass-times, and systems-based activities and how they relate to his six elements. 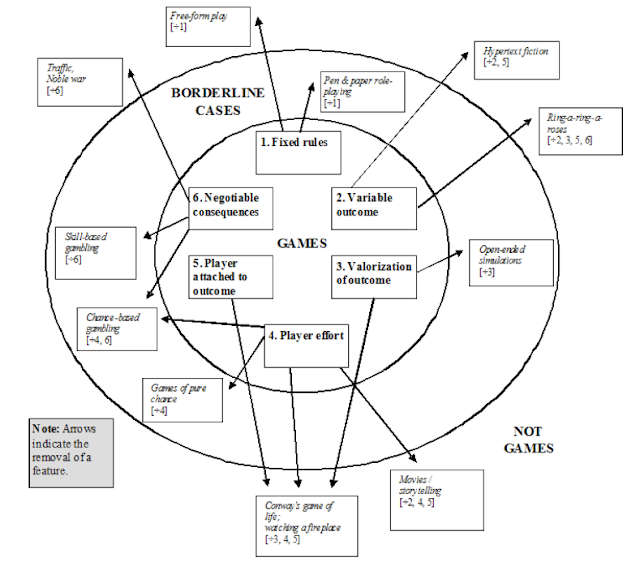 Juul points to two activities that violate the Fixed Rule element: RPGs and freeform play. Now, like I assume most readers of this blog to be, I'm a table top RPG enthusiast. And it may seem grating at first to see our beloved pass-time listed as less of a game than a computer RPG or board game. But at least hear me out as I delve into how I think this definition of 'gameness' may help develop a better theory of RPGs than GNS.

How do (tabletop) RPGs violate the element? Juul says:


Pen and paper Role-playing games are not normal games because with a human game master, their rules are not fixed beyond discussion (p. 8)

With an end note saying:


Rather much of the enjoyment of role-playing games is due to the flexibility of the rules. (p. 13)

This is a sentiment I think most RPG players would agree with. Isn't the flexibility of the rules one of the first thing we praise about table top RPGs when comparing them to computer RPGs?

The important takeaway from this, in my opinion, is the inference that can be made from the chart above and Juul's comment that rules evolve over time to be unambiguous:

These six elements are not binary. It's not a question of "does it have it or not?" but instead it's a question of "how much does it have?" Each element is a cline, and activities can be more or less game-like along each axis. Some of the clines may be steeper (less forgiving of deviance) than others. That will require a bit more analysis of Juul's taxonomy presented in the chart above.

Tabletop RPGs have fixed rules. That's what the rulebooks are. But, by their nature (simulating a fantasy universe) they need that wiggle room of sanctioning the game master/referee to modify, add, subtract or otherwise change the rules to fit unusual situations or the preferences of the game group. Juul doesn't say they are not games, he says that they are not normal games. In other words, the game master allows RPGs to exist down the cline of rules fixedness, but still within the scope of activities considered to be 'games' by this definition.

I included the Calvinball comic above because, if it were a real game, that's an example of something that would be farther down the cline of rules fixedness from RPGs but still above free-form play (although not by much). Calvin and Hobbes do create rules for their game, it's just that the rules are in a constant state of flux. I don't remember seeing a 'calvinball' comic where Calvin and Hobbes argue about the rules. It would seem, like with improv acting/comedy training, that the one fixed rule is that every player has to accept what the other players throw out, although with the ability to further modify the input by creating a new rule later.

True freeform play is as far down the cline as you can get, and Juul labels it as "not a game."

Games have rules. Well-established/well-developed games have fixed rules. Games without fixed rules, or with ambiguous rules, tend to solidify the rules and remove ambiguities over time.

The interesting coda of this is to look at the evolution of various games over time. OD&D, for example, is full of ambiguities and vague references. Basic D&D helped clarify them. AD&D sought to expand, clarify, and disambiguate for tournament play. AD&D 2E sought to clarify the hodgepodge presentation (and some still ambiguous rules) of 1E. 3E sought to streamline the mechanics with a universal resolution system (no more questions of what die to roll, do I roll over or under, etc.). 4E tried to turn table top gaming into a system like those in computer RPGs. 5E has taken a step back from 4E as that system was hurting what distinguished TTRPGs from other types of games (4E made the play too 'normal' in Juul's terms), but still tried to make the game simple and easy to understand. Pathfinder went in the direction of codifying EVERYTHING to remove ambiguity.

Look at spells. Originally spell descriptions gave a brief description of what it did. As we move forward in time, more and more creative uses of spells get ruled out straight away, or else sanctioned and given specific rules with which to implement them in that manner. Can I cast light in the evil high priest's eyes to blind him? We go from DM ruling on that to specific allowance in the rules. Can I stand on my floating disk to use it as an impromptu elevator? It says follows me at waist level... Again, we go from DM needing to make a ruling in earlier editions to specific statements that the disk does NOT change elevation suddenly (like if you fall) but only slow elevation changes like going up a ramp or flight of stairs in later editions.

The OSR, on the whole, seems to be a reaction to this drift toward disambiguity, trying to preserve what makes RPGs unique and distinct from most other types of games.

I don't have enough experience with multiple editions of other games to make a similar comparison, but it would be an interesting line of research to follow.