The Land of Dinosaurs and Pastry 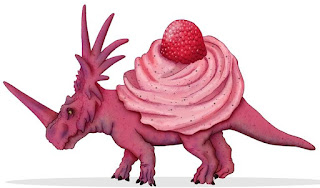 Dean continues to show us what Eberron looks like when meshed with Candy Land. In the past, we've met with turducken monsters, cookie gnomes, a pumpkin spice dragon, and other food/confectionery themed monsters in his game. We also had a fuller than full group last night, with eight players in addition to Dean as the DM. Here's my latest (in character) play report from our game last night:


The Giant's Tomb
Being a continuation of the journal of Jack Summerisle, Green Knight of the Eldeen Reaches, and companions various and sundry, in search of the City of the Titans within the hollow world of Pellucidar, far below the surface of our world of Eberron.

Having rested following our battle with the pair of fierce dinosaurs that dwell in this strange, hidden world, we set out towards the confluence of the great river and the forests, where our divinations had suggested the City of the Titans might be found. As we traversed the plains, we saw more of these giant reptiles, only these ones seemed different. Having prepared myself with an ancient druidic incantation that allows converse with nature's beasts, I approached, along with Yuv the Dragonborn Cleric of Radiance and Thia Moonbrook, Elven Tempest Cleric. While the beasts were able to converse like natural creatures, they were actually some sort of blend of prehistoric beast and dessert. They indicated that there were some ruins connected with the Giants in the hills before the Great River. They also, when asked about the "hats" which had been fused to the skulls of the two great saurian beasts that beset us previously, suggested that we look to the river, or possibly to the south. Also, they wanted the "hats" destroyed. I promised, on my honor as a Paladin, that the "hats" would be put to no evil use while in our possession. They seemed to sense the truth of my words, and were satisfied.

We traveled onward, and came to a series of burial mounds. Rhea the Witch detected faint magic in the largest of them and Yuv's augury suggested danger in opening the mound, so we set about examining the door, and found it trapped. Odraynne the Human Bard, Thia, Flagan the Halfling Pugilist, and Jade the Elf Ranger attempted several methods to disarm the trap mechanism, which resulted in blasts of rocks and dirt with each failed attempt. Finally, they succeeded, but a secondary trap was sprung when the door was opened. The ground fell away, and in an instant sand began to fill the pit, trapping several of our group completely engulfed. Not only that, but giant scarab beetles infested the sands, biting at us as those of us who were not trapped tried to free our companions. Eventually, Thia's gust of wind dispersed the sands and beetles.

Inside the mound, there were three passageways. We chose the one to the left, which descended into the darkness (or ascended, I should say, as we are in the upside down world of Pellucidar!). We came to a chamber with, as Thia and I noticed, had a soft, rubbery floor. We tested it in several ways, and finding it suspicious, found a way to bypass it. Flagan used his gymnastics ability to cross the room on the solid walls while holding a rope. We secured it, and the party was able to cross safely.

At the bottom of the tomb, we found a room long ago looted by treasure hunters or vandals. One of these long ago looters' skeletons lay beneath the ruins of a golem or similar guardian, and seemed to be a human, but with a tail. There were also tracks of some sort of serpentine creature. The sarcophagus had been cracked, and most of the grave-goods despoiled. It was then that we sensed a chill presence, and found the ghost of the Giant Priest that we assume was buried in this mound blocking our escape, and angry at our presence.

We set to attacking it, although some of our party, such as Makarak the Orc Barbarian, had mundane weaponry which seemed to be less than full effect on the undead horror. Additionally, it let out a fearsome moaning which caused Rhea and both of our Clerics to freeze in fear for some moments. It also had a chill aura, but by focusing my mind on the goodness of the Greensong, my own aura was able to partially mitigate this chill glammer. With a combination of Makarak's and my axes, Flagan's fists, Jade's arrows, and spells from Odraynne, Rhea, Thia and Yuv, we finally put paid to the haunt. And now, we know, thanks to the carvings on the walls, that the missing rod of this great priest of the ancient Giants may be necessary if we are to awaken the Mountain above, so that it may rid itself of the Ghoul Kingdom.

Posted by Dennis Laffey at 5:56 PM