A Descent Most Perilous

A Descent Most Perilous


Being a continuation of the journal of the renowned Green Knight Jack Summerisle, and companions various and sundry, in the cavernous deeps beneath the world of Eberron.

Having found at long last Connor, the half-elven father of our companion Jade the Ranger (also half-elven), we set about freeing as many of the slaves of the ghouls as we were able. Luckily, no alarums were sounded, due to the battle still raging between the horrid ghouls and our coalition of the many underground tribes. Connor was anxious to return to the surface, as were most of the former slaves, but one of the Dragonmarked we had rescued, an orc shaman, told us of the spirit of the mountain.

It seems that once upon a time, the mountain was alive and awake. While it still lives, it slumbers and the kingdom of the ghouls give it nightmares, or so the shaman told us. Connor asked that we continue to search for the Crown of Air and Darkness, and the shaman asked that we find a way to wake the mountain's spirit. Both had clues leading even deeper into the Kyber, to a subterranean realm known as Pellucidar. The entrance to this realm, a pit going deeper into the heart of the world, was on the far side of the necropolis.

Morax, the half-orc bounty hunter (also among the Dragonmarked) agreed to accompany us on our quest. Jade the Ranger, Rhea the Witch, Yuv the Dragonborn Cleric of Radiance, Thia the Elven Tempest Cleric, and myself made up the party.

We navigated through the necropolis without incident, but a ghoul warrior with a mutant hairless cat-rat beast was guarding the path to the Pit. It attacked Thia, who was scouting ahead, but she managed to resist the paralyzing touch of the undead guardian. Rhea hurled fireballs, Yuv used sacred flame magic, Jade and Morax fired their bows, and I charged it with my axe. The cat beast attempted to hinder Cassius, my giant cave weta mount, but I successfully chased it away, then set on the guard. While he was a tough opponent, we managed to defeat him and his cat-rat.

At the pit, we spied a strange creature. It was a giant, floating undead head with three eyes. While we took cover, not knowing what it would do, Rhea cast a spell to summon a demon from hell. The demon managed to defeat the giant floating ghoul head, and then as it charged at us, we destroyed the weakened fiend. Now, we were at the Pit, which looked to go down without end. 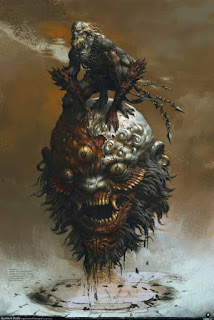 We rested for the night to set out fresh on this next stage of our quest. The pit had a narrow, winding stone stair set in it, which Jade and Yuv negotiated, tied together with a rope. Thia and I rode on Cassius, who had no trouble negotiating the climb, and likewise Rhea enlarged her spider-bat familiar into a mount also capable of climbing and flying. We had one scare, when Yuv and Jade slipped and fell, but with quick action by all of the party, we managed to catch them before they fell far.

Finally, we came to the end of the stairs, but not the end of the Pit. This was a quandary. How could we proceed? We considered all of the magic at our disposal, but none seemed adequate. I sent Cassius to scout if the stairs resumed lower down, but my trusty steed got to the end of our telepathic bond without any good news to report. Finally, Jade experimented with a pair of bladed gauntlets which the ghoul guardian had been wearing, and they allowed him to climb by piercing the walls. Yuv was tied to a rope suspended between Cassius and Rhea's spider-bat. While it was a long descent, we eventually reached the bottom.

And now here we stand, on the threshold of Pellucidar, a strange new underground world to explore!