Some have leveled criticism at the OSR as being nothing but nostalgia. Many of them were 3E/Pathfinder fans. But well, what do you know, it's been so long that 3E is finally a source of nostalgia.

Over the weekend, my second boy (just shy of his second birthday) was opening the bedroom closets and various random drawers and pulling things out. These consisted of stored clothes, spare electronics cables and accessories, and some gaming stuff. I keep my board games, HeroClix, Magic: The Gathering cards, etc. in those closets. And among the various "finds" was this little black pocket notebook from my time in Japan, the years 2005-2007 to be exact: 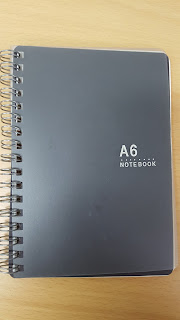 The notebook contained, among other mundane things such as notes on sister-city activities and planning things to do with my wife-to-be, lots of gaming notes. In fact, the first three pages are notes I took playing a game of Trinity (White Wolf's weird mutant street-level supers versus Lovecraftian freaks sci-fi game) with the Yamanashi Gamers.

I know that the notebook dates to 2005 because I joined this game the day after watching the movie Sin City in the theater. And my PC was heavily influenced by the film. Harlan was a big, tough, not necessarily so smart but clever private eye with extra-sensory perception (meaning he could project all five of his senses to distant locations - and yes, he spent time tasting many things he probably shouldn't have this way...).

There are three pages of notes from the sessions, and reading these does take me back! 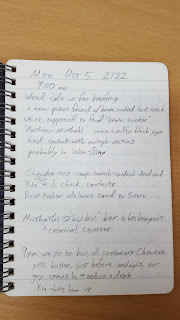 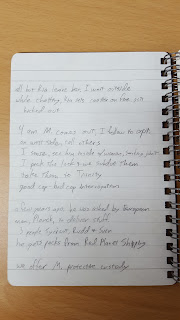 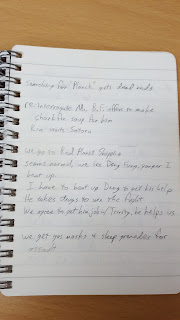 The game was one of suspense, mystery and shifting alliances. Very noir. My PC fit right in. If I remember right, the final big battle against the abomination that was sucking psions' minds dry was pretty hectic but Harlan survived it, thanks to a rail gun and just being tough as nails.

Anyway, there are more notes, plans, and characters in this notebook, most from d20 system games with the Yamanashi and Ebisu gaming groups. I'll be sharing more over the next few weeks just to fuel that gaming nostalgia for the mid-oughts!

Posted by Dennis Laffey at 1:05 PM